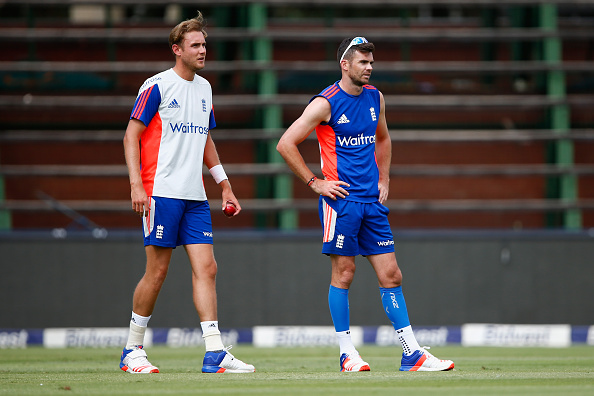 While Stuart Broad and Jimmy Anderson are now in the twilight stages of their careers in international cricket, England’s greatest duo of bowlers still continue to pick up wickets in the Test arena.

Broad and Anderson are a long way clear of anyone in the most Test wickets statistics for England. Anderson leads the way with 587 wickets, while Broad is not far behind his teammate with 507.

Anderson began his international career in 2003, four years prior to Broad. He made his Test debut against Zimbabwe at Lord’s. The Lancashire bowler picked up five wickets in that match in an impressive performance. Nobody, however, could have envisaged him going on to have the career he has had.

The 38-year-old is now the leading wicket-taker by any pace bowler in the history of Test cricket. He broke that record by overcoming one of his idols, Glen McGrath, who retired on 563 wickets.

Broad’s opening game in Test cricket came overseas against Sri Lanka in 2007. He took just one wicket in that match in tough conditions for pace bowlers. Since then he has been so consistent in the five-day format, home and abroad.

Both Men Have Pushed Each Other In the Game

Broad recently claimed that the pair have been instrumental in each other’s careers so far as each individual’s success has spurred the other on.

All great partnerships in cricket are built upon mutual respect, whether that is with the bat or ball. Anderson and Broad have had a great amount of confidence in each other’s game. If one has had an off day, the other has been able to get them out of trouble with wickets.

There is also likely to have been some friendly rivalry between the pair, wanting to be the number bowler for England and world cricket. Both men can claim to have had that tag at various stages of their careers.

How Long Can the Pair Go on for?

It looked as though the partnership could be coming to an end earlier this year when Stuart Broad was dropped by England for their First Test against West Indies. Broad made a mockery of that decision by returning for the Second Test, taking six wickets in a superb performance. He then got awarded the Malcolm Marshall Memorial Trophy for the most wickets in the series.

Broad’s next assignment will be the conclusion of the home series against Pakistan where England are 1/8 in the cricket betting to prevail. The Nottinghamshire seamer was once again dangerous with the ball in the First Test. He finished with six wickets in England’s win at Old Trafford.

Anderson has struggled with injuries over the last couple of years which has meant he has missed a lot of cricket. Both him and England are being quite sensible about how much he plays now for the national team.

An aim for Anderson will be to feature during the Ashes in 2021 in Australia. This would be the perfect series for him to bow out, ending one of the most successful partnerships with the ball the sport has ever seen.

Broad may decide to go on much longer than Anderson but without his longstanding friend bowling down the opposite end, the greatest England partnership would be no more.