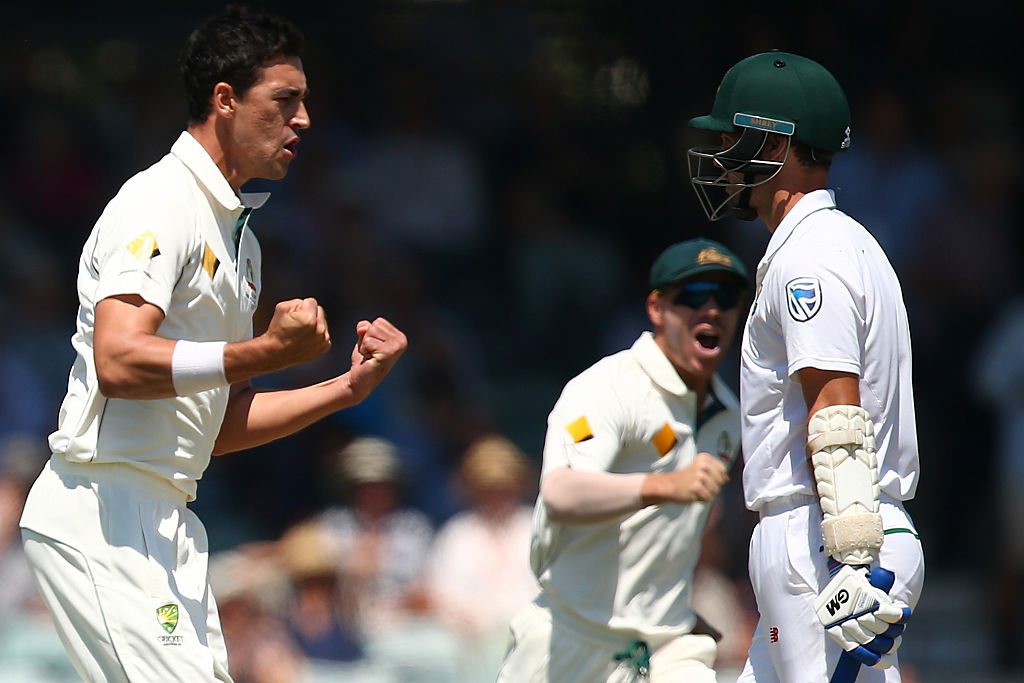 Australia have put themselves in a commanding position after the opening day of the first Test against South Africa at the WACA in Perth.

The visitors sent themselves in to bat before Australia made some damage with the ball early, although the Proteas managed to steady themselves late to post a total of 242.

David Warner took control of the final session as soon as Australia was sent in to bat, making 50 runs from just 39 balls with the help of 11 boundaries.

Australia struck early when Mitchell Starc set the tone just four balls into the first over of the day, as Starc's delivery forced an edge from Stephen Cook, and Mitch Marsh leap to make a fantastic catch at gully.

Just two overs later Hashim Amla was removed after being caught by Steve Smith at second slip from Josh Hazlewood, and the Proteas were staring at figures of 2/5.

Australia's hot start continued courtesy of Hazlewood once again, this time dismissing Dean Elgar with the help of a catch from Peter Nevill behind the stumps.

JP Duminy was the next to fall in quick succession for the Proteas, as they suddenly found themselves in serious trouble at 4/32.

Duminy appeared to have edged the ball to Nevill but reviewed the decision quite quickly.

The decision was made to go back down to the umpire for his original call, and Australia were asserting themselves on the contest.

From then however it was all South Africa, as Faf du Plessis and Temba Bavuma combined for an impressive 46 run partnership to close the session.

Bavuma would go on to register 51 before being dismissed by a brilliant catch from an in-close Shaun Marsh, as Nathan Lyon took his first wicket of the afternoon.

Quinton de Kock came in and gave the Proteas life, but he couldn't do much to prevent himself from losing three batting partners.

On 84 de Kock didn't wasn't able to read Hazlewood's bowling and mistimed his shot, allowing for Shaun Marsh to catch the final key wicket of the innings.

Chasing 242 the hosts started strongly, as Warner took on the South Africans at every opportunity.

The left-hander was given a lifeline on 17* however, as Vernon Philander looked to have his measure with a beautiful delivery that hit the opener flush on the pad.

South Africa reviewed the decision after the initial call was given not out, and the review didn't last long given the first call of the third umpire was to deem the delivery a no-ball.

Warner made the tourists pay en route to an impressive 73*, as a solid Shaun Marsh played an important second-fiddle to Warner's great start.

Warner brought up Australia's ton in the final over of the day as they headed into the sheds in a very strong position.