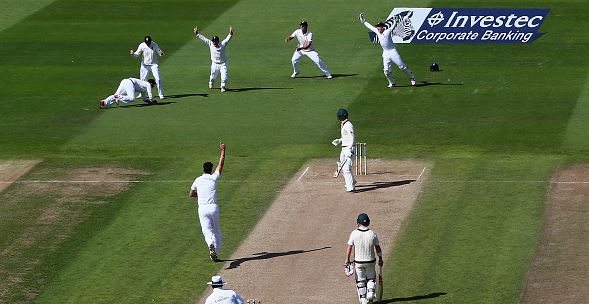 Following Australia’s defeat to England in the third Ashes Test, one thing has became very clear. Australia cannot win the series unless the middle order batsmen can produce a stunning form reversal.

Despite playing in a series that includes a monster win by 405 runs, the Australian middle order has failed miserably in English conditions.

As arguably Australia’s best batsman and certainly the most experienced, Clarke will be very disappointed with his efforts thus far.

Although he did post two starts, including a 32 not out, the fact he only scored 7 in an innings when Australia scored well over 500 on a pitch akin to a road, would worry members of the Australian camp.

Usually the man to stand up when the side is under pressure, Clarke has crumbled so far. For him to not post a single half century in six trips to the crease, is a genuine worry.

Adam Voges, who brought a brilliant vain of form into the series following his debut in the West Indies, has a top score of just 31 in his five digs.

His place is surely under threat, despite his brilliant campaign in the Caribbean and I would not be at all surprised to see him make way for Shaun Marsh in the fourth Test.

Neither Mitch Marsh nor the man he replaced in Shane Watson, have posted any worthwhile scores. Marsh’s best knock came in a cameo appearance where Australia were looking for quick runs against an exhausted and broken English attack.

Australia’s top scores have come from one of the top three, or a member of the tail.

Rogers, Warner and Smith have kept Australia in the series, with big knocks across the first three Tests.

Mitch Johnson’s score of 77, with some help from Warner’s half century, was the main reason Australia had any sort of score to defend in second innings of the third Test.

Simply put, Australia need some big scores from Clarke, Voges or Shaun Marsh, and Mitchell Marsh, or they will be at long odds to bring the precious urn home.

David Warner, despite some good scores, has looked worried by the moving ball, and has been a little lucky to post the scores he has. That being said, his positive play has seen him earn some luck so to speak, with edges flying through, or over the slips cordon.

Chris Rogers has been the side’s best batsman and can be extremely happy with his efforts. He has posted big scores in four of his knocks during the series.

Steve Smith posted a brilliant double tonne and a half century at Lords, but he failed to pass ten in the third test and made a pair of 33s at Cardiff.

In this day and age, where every player is watched and has a plan formulated for, to rely on three batsman is making life very difficult.

Shaun Marsh may come in for Adam Voges, adding some international experience and he has been brilliant form in the tour matches since arriving in the UK.

Hopefully his possible inclusion fires his brother Mitch into some form. Although he has been good with the ball, Marsh is looked as a batting all-rounder, and needs to contribute.

Michael Clarke, who is possibly playing his final Ashes series, will be looking to go out with a bang. Should he continue his form slump, the English bowlers will be licking their lips.

Unless the middle order can ease the pressure on the top three and the likes of Peter Nevill and Mitchell Johnson, the series could be over in the next fixture.

England, having taken a 2-1 lead through three Tests, only need to win the next test to win the series. If the heavens were to open, England could sit, feet up, and regain the urn, and bragging rights.

Australia NEED to win one of the next two matches to have any hope of retaining the Ashes. A drawn series will do for the tourists, but a win seems a long way off given their current predicament.

Anderson was back at his destructive best in the third Test and made the Aussies look second rate in their first innings.

Mark Wood will most likely come back into the side if he passed fit after missing out in Birmingham, but the hosts will really miss Anderson.

The lift Anderson can give both his team and the crowd is unparalleled. Stuart Broad is a brilliant bowler, but even he lacks the ability to move the ball like their strike bowler Anderson.

Although no bowler at this level can be taken lightly, there really are no excuses for the Aussie batsman in the upcoming fourth Test at Trent Bridge.