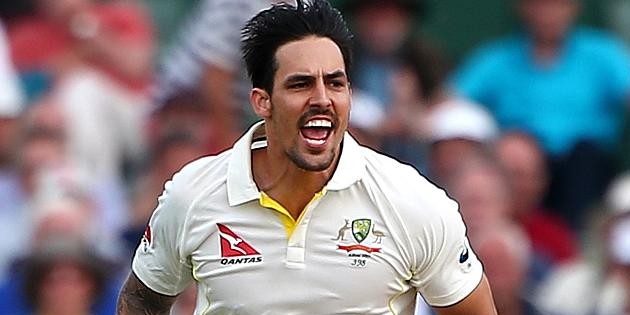 Reports coming out of England suggest that pitch curators have been encouraged to produce “slow deck” pitches, in the hope that it will blunt the Aussie pace attack.

By resorting to such tactics, England are all but admitting that they do not possess the quick bowlers to rival the potent attack that Australia will boast.

Despite losing Ryan Harris just days out from the test series due to injury, the Aussies still have the in-form trio of Mitchell Johnson, Mitchell Starc and Josh Hazlewood to spearhead their attack.

Australia recorded a lop sided five-nil thrashing of their opponents in the 2013/14 series on the back of intimidating fast bowling. The chief destroyer was Mitchell Johnson, who completed the series with an amazing 37 wickets.

Johnson’s haul was 15 wickets more than his closest rival in Ryan Harris with 22, and a further one back was England’s best, Stuart Broad.

Mitchell Starc’s form over the past twelve months have been electric and he was named player of the tournament at the recent World Cup.

Josh Hazlewood has 24 wickets at under 20 runs per wicket during his five match test career.

There is justification in England’s tactics, but they are heading down a very dangerous course, as Australia does not need to win a single test match to reclaim the Ashes, with a drawn series ensuring the Aussies will retain the urn.

By taking the juice out of the pitches, England are increasing the chances of huge first innings totals being posted.

If Michael Clarke wishes, he could very well win the toss and bat for the first three days of all five tests.

In their efforts to deprive the Aussie attack of movement or bounce, England could be condemning themselves to a series full of draws, should their bowlers be unable to take 20 wickets each test.

Plus, it’s not like it hasn’t been known to rain a fair bit in England, even during the summer months.

Stuart Broad and James Anderson are brilliant bowlers. Both have wreaked havoc on Aussie line-ups in England, where the ball is known to swing more than in Australian conditions.

The likely third bowler in Mark Wood, picked up nine wickets across two tests against the New Zealanders recently, indicating he too can get the job done with the ball.

If the reports are true, off-spin bowlers Mooen Ali (England) and Australia’s Nathan Lyon may be called upon to bowl a massive amount of overs.

I wouldn’t be surprised if the all-round bowlers such as Stokes and Watson play an important role in the series. They will have to keep it tight, or batsman could really cash in during these periods.

England’s reported tactics also don’t show a whole lot of confidence in their batsman either.

Mitchell Johnson had the number of almost every English batsman during the Aussie summer last Ashes series, however in a completely different set of conditions, it’s a different ball game entirely.

England’s reported negative tactics may blunt the Aussie pace attack, but at what cost? There’s no use losing a shot at the famous urn through a boring, drawn test series.

I guarantee the directions given to those preparing the grounds will change if the Aussies take an early series lead.