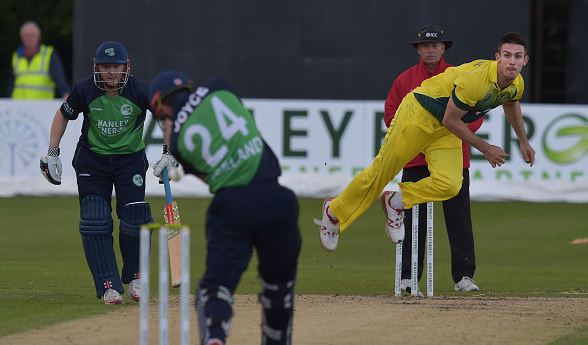 Australia has gotten their ODI tour of the UK off to a winning, beating Ireland by 23 runs in Belfast.

Australia won the toss and elected to bat, in a match that was reduced to 47 overs each, after a delayed start due to rain early in the day.

Dave Warner and debutant Joe Burns got off to a great start, as the pair put on 139 runs for the first wicket, before Burns went for an impressive 69 runs. Warner went soon after for 84 when he picked out Ed Joyce in the deep to make it 2-165.

Shane Watson was unbeaten on 26 and Wade unbeaten on two, when the rain set in to cut short Australia's innings on 6-222 after 40.2 overs.

Ireland in reply were given a target of 195 from 27 overs under the Duck-Worth Lewis system.

The hosts started poorly, losing two wickets in the first two overs. Play was then interrupted by rain once again.

When the players returned to the field, the target was revised to 181 off 24 overs.

A steady partnership between Joyce (44) and O'Brien (45) upon the resumption of play gave Ireland a glimmer of hope as they took up the challenge.

However, when Glenn Maxwell broke the partnership, the home side began to lose wickets at consistent intervals, before being bowled all out for 157 in the 24th over.

Nathan Couter-Nile did most of the damage with the ball, taking 3-13, while Maxwell, Cummins and Starc each took two wickets.