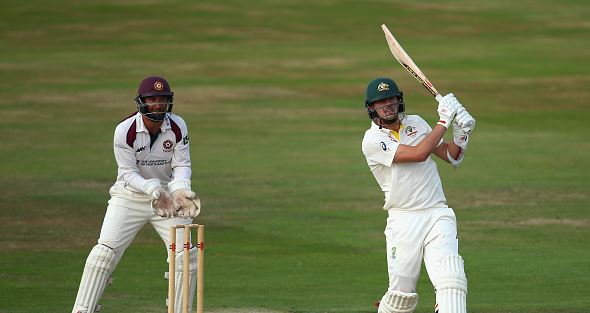 Tailender Pat Cummins has earned Australia a draw after another batting collapse in a tour match against Northamptonshire.

Northamptonshire scored 396 in their first innings, with Australian-born Steven Crook scoring an unbeaten 142.

Australia then lost new their new captain and vice-captain cheaply to be 2-13 after just six overs. Shaun Marsh fell soon after to be 3-49.

The collapse continued with the tourists losing wickets at consistent intervals, before finding themselves at 8-180, some 216 runs behind the English County side and on the brink of being forced to follow on in an embarrassing day of cricket in what was meant to be a tune up for the fifth and final Ashes Test.

However taileneders Pat Cummins and Nathan Lyon then rescued the innings, with Lyon scoring 41 and Cummins scoring an unbeaten 82. Australia reached 9-312 at stumps on the third and final day of the tour match, 84 runs behind Northamptonshire's first innings total.