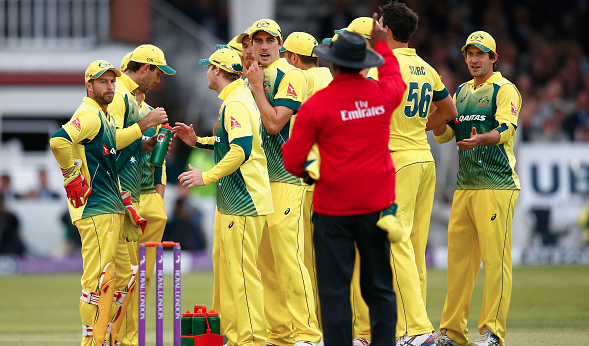 Australia has won the second ODI against England overnight, amid a controversial dismissal, with Ben Stokes given out obstructing his wicket.

Australia was sent into bat, reaching 7-309 in a rain affected match reduced to 49 overs a side.

England was then bowled out for 245 in reply to give Australia a 64 run win.

Steve Smith top scored for Australia with 70, while Bailey and Mitch marsh also made half centuries. Opener Dave Warner was forced to retire after just the second ball of the day, when he was struck on the thumb from a short ball from Steven Finn.

The real drama of the however, unfolded midway through England's ininngs, with all-round Ben Stokes becoming the first Englishman in ODI history to be given out obstructing his wicket.

Stokes prodded the ball back down the wicket to bowler Mitchell Starc, and took several steps down the wicket as he considered a quick single, with Starc then having a shy at the stumps. The Englishman then fell to the ground as the ball came his way, however, he also stuck out his hand to parry the ball away. The umpires deliberated for several minutes before giving Stokes out for obstructing his wicket.

The packed Lord's crowd was seething with the decision, booing as Stokes was given out.

Morgan top scored with 85 for the hosts, while Cummins took four wickets for Australia.