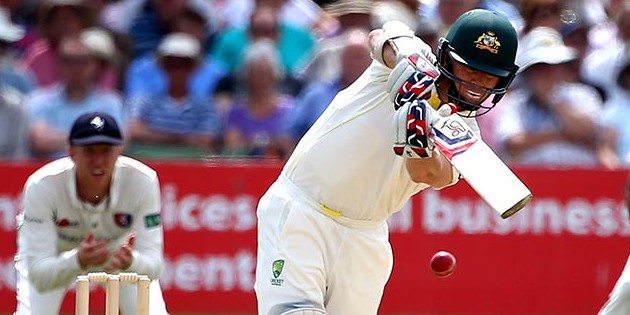 Shaun Marsh has pushed his case for a first Test call up with a century on day one of the tout match against Kent, while three other Aussie batsmen also passed 50.

Australia has started its Ashes preparations perfectly, reaching 3-348 at Stumps on day one of the opening tour match against Kent.

Marsh starred with 114 to put his hand up for selection in the first Test. Opening partner Chris Rogers also looked comfortable, scoring 84, as the pair put on a 181 for the first wicket.

Steve Smith then continued his good form, scoring 71 not out, while Clarke also notched a half century.

Opener Dave Warner was rested to help selectors get a better gauge of form heading into the opening Test.

However, day one only served to cause further headaches for the selectors, with openers Chris Rogers and Shaun Marsh both impressing.

Coach Darren Lehmann said that good form in the tour matches will go a long way to being picked for the first Test.

"Players in form go a long way to ticking the boxes and getting in the side," coach Darren Lehmann told radio station SEN.

"So these two tour games are very important for the whole squad.

"They're not headaches as such, I think they're great debates.

"We've got such good depth now, so we've just got to pick the best XI for that particular game."

Smith will resume day two on 71 not out, while Watson is eight not out.