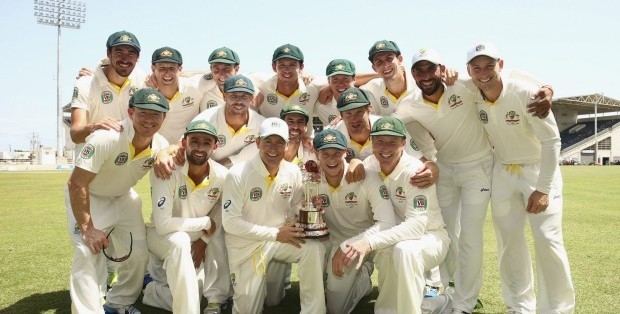 Australia has retained the Frank Worrel Trophy with a comprehensive series win against the West Indies, winning the Second Test by a whopping 277 runs.

The Test was over inside three and a half days, with the West Indies collapsing to be dismissed for just 114 in their second innings.

The hosts started Day Four on 2-16, chasing an improbable 392 for victory.

The morning started poorly for the Windies, with Mitchell Starc ripping Shane Dowrich’s off stump out of the ground for four, in just the fifth over to hold a commanding position with the score sitting at 3-20. Hazlewood then took two wickets in as many over to have the Windies at 5-33. Mitchell Johnson then chimed in with his first wicket of the innings, clean bowling Hope for 16, to make 6-55.

When Shane Watson removed Jason Holder for one, the score was 7-62, with it looking increasingly unlikely that the West Indies would make it to three figures. However, Ramdin and Permaul combined for a 49 run partnership to take the score to 111, before Ramdin was caught at slip by Clarke, off the bowling of Johnson. Off-spinner Nathan Lyon then claimed the final two wickets of the match to finish the innings at 114, and complete a 277 run win.

Captain Michael Clark said he was very pleased with the way his side played.

"To win the first one in three days and this one in four days is a fantastic achievement," Clarke said.

"We've obviously played really well here. We've got another tough series coming up in England but right now it's about enjoying the success we've had here in the West Indies.

"I think we played some really good cricket throughout this series in both Test matches.

"It was nice to see the batters make the runs and the bowlers bowl as well as they have.

"The bowlers were exceptional throughout this series on wickets that were quite slow. There wasn't much pace and bounce there for the fast bowlers but I thought they worked really hard."

Earlier, the in-form Steve Smith set up the win with a brilliant 199 in the first innings.

Hazlewood was then the star of the bowling attack, taking five wickets as Australia bowled the West Indies out for 220 in their first dig. Jason Holder scored 82 and Blackwood managed 51 for the home side.

The Windies were left 392 to win, with over two days to spare in the final innings, after Australia declared on 2-212 in their second innings. Warner and Marsh scored 62 and 69 respectively, while Smith was unbeaten on 54.

Steve Smith was named Man of the Match and Josh Hazelwood Man of the Series, for taking 12 wickets in the two Test series.

Australia will now head into next month’s Ashes series in England full of confidence, after completely dismantling the West Indies to complete a 2-0 series whitewash.