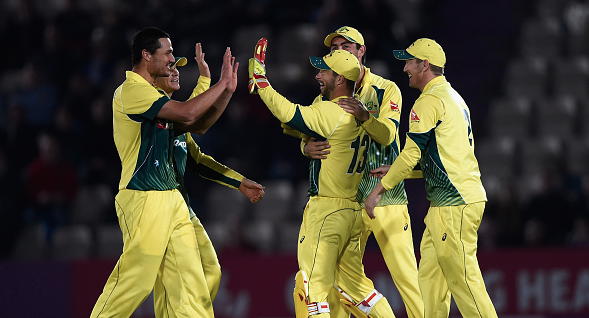 Australia has beaten England by 59 runs in the first ODI overnight.

Australia won the toss and elected to bat, scoring 6-305 off 50 overs, before bowling England all out for 246.

The new opening combination of Joe Burns and David Warner put together 76 for the opening wicket, before Burns went for 44. Warner followed soon after for 59, before new captain Steve Smith also made 44.

After another middle order collapse, in which Australia lost 4-29 that left the tourists at 6-193, former Test wicket keeper Matthew Wade put in a man of the match performance to make an unbeaten 71 off 50 balls. He combined with Mitch Marsh (40 off 34) to guide the Aussies past 300.

England started well in reply with opener Jason Roy scoring 67 and No.3 James Taylor scoring 49. However, the hosts then suffered a disastrous collapse, losing their last seven wickets for just 74 runs to be dismissed for 246, 60 runs short of victory.

Every Australian bowler was among the wickets, with Watson, Starc, Cummins and Coulter-Nile each getting two wickets.

See the full scorecard at ESPNcricinfo.com