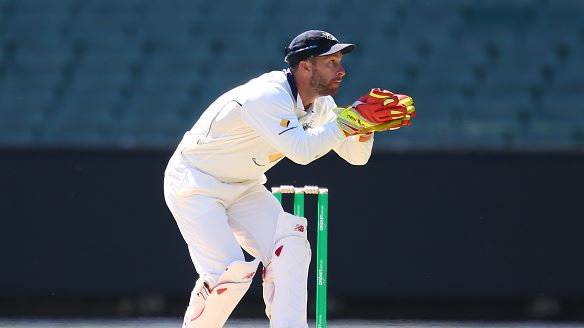 The wicket keeper is one of the more interesting positions in the Australian lineup now, with several quality options, both young and old, putting their hand up for national selection.

While Peter Nevill seems to have his gloves pretty firmly on the test keeper role, is he really the best in the country? Is he even the best in his state? What’s more valuable from a wicket keeper - their keeping or their batting?

Below are Australia’s top five keepers as of this week.

Starting off with what may be a surprise inclusion on this list, Peter Handscomb has so far forged out a solid start to the season with Victoria in the short and long form of the game.

Whilst he only managed a top score of 67 in the One-Day Cup, he came out of the blocks firing in the Sheffield Shield, managing 137 against Queensland in Victoria’ first match.

What hurts his ranking on this list is that he does not keep regularly for any side he plays for, and the man he is stuck behind – Matt Wade – is just about as good as they come in the country.

Before this season, Ryan Carters was knocking on the door for international selection, whether as a specialist batsman or a wicket keeper, but after last week’s efforts against New Zealand, he has now firmly kicked the door down.

Carters won NSW’s Sheffield Shield player of the year in 2013-14. He also scored four first-class centuries, before he put on 209 against New Zealand batting for the Cricket Australia XI.

The 25 year-old averages almost 40 in first-class cricket and 35 in list A, and has been solid in Twenty-20 as well. Surely this will be the year he gets his chance.

Despite his recent retirement from all but Big Bash League cricket, Brad Haddin still comes in as the third-best wicket keeper in the country.

Over his career, Haddin batted at an average of 33 in Test cricket, and has four international man of the match awards to his name, coming in 2007, 08, 09 and 10, which speaks of his longevity at the top level.

Thanks for your magnificent service to Australia, Hads.

Peter Nevill has shown promise as Australia’s long-term keeping option, despite already being 30.

He debuted well in the latest Ashes series against England, doing well enough with both the gloves and the bat to warrant his selection again in the upcoming series against New Zealand.

Despite being the incumbent test keeper, it may surprise most to see Nevill come in at only second on this list. But there is a perfectly good reason why.

Many were surprised when Peter Nevill was chosen over Matthew Wade to man the stumps for the test team – myself included.

Wade has a superior Test and list A average to Nevill with both bat and gloves, has more first class experience, and is younger than him by three years. He also had a far superior One-Day season and has one Test hundred to his name.

This of course begs the question, why has Nevill been chosen over Wade for test duties? Batting? No. Wicket keeping? Probably not. Age? Definitely not. Experience? Nope. Some NSW conspiracy? Maybe.

One thing however is clear as day to me – both Peter Nevill and Matt Wade are great wicket keepers. But Wadey is definitely the best in the country.