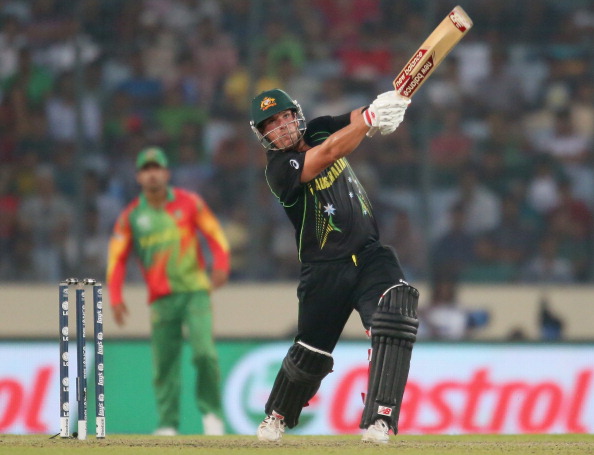 The Big Bash tournament is not only a brilliant source of entertainment, but it is also ensuring that Australia has a supreme crop of players to choose from to contest the T20 world cup.

The tournament, to take place in India, starts on March 9th, with the Australians to start their campaign on the 17th in a match against New Zealand.

Having also drawn hosts India, Pakistan and a qualifier (most likely to be Bangladesh) the Aussies are going to have to be on their game from the start just to make it through the group stage of the tournament.

2016 presents a brilliant opportunity to win our very first T20 World Cup tournament. The below, is the 15 man squad I would select for the tournament. At the bottom are seven players I would select in the initial 22 man set up, all of which could come in and represent their country.

It is a squad that takes a look to the future, as champion players such as Shane Watson and Brad Haddin, who I certainly would not begrudge a spot in the squad, have been overlooked.

Players unavailable due to injury include Pat Cummins, Nathan Coulter-Nile and Moisés Henriques. Starc may be cleared to play in time however with surgery needed at some point in 2016, the gap between Tests after the New Zealand tour looks his best bet.

David Warner is an automatic selection for any Australian side regardless of the format. He has the ability to take a game away from any opposition within the opening six over power-play. Warner played a huge part in the Australian’s successful one day World Cup campaign in 2015 and carried his impressive form over into the test arena. Arguably one of the world’s most destructive batsmen, if he is fit, he travels.

Although arguably not as assured of a spot as his opening partner in Warner, Finch is a near automatic selection in the shorter forms of the game. He too had a brilliant one day World Cup with his opening partnership with Warner taking games almost out of reach in the early overs. His knock of 72 against a brilliant Scorchers bowling attack came off just 48 deliveries, and proves he has the form to take him to India.

Although at 35 his selection somewhat contradicts my earlier statement of a look to the future, if any man deserves a one off shot on the biggest stage it is Michael Klinger. He has been one of, if not the best batsman in recent seasons of the Big Bash and his 90 not out against the Renegades proves that. He would not be the first choice opener with Warner and Finch in the squad but could very easily bat at three or come in to score quick runs later in the inning.

I don’t think any Australia, or world side, would be complete without the Aussie captain. The highest run scorer in test cricket for 2015 and Australia’s top run scorer at last year’s one day world cup, Smith is THE prized wicket in world cricket right now. Probably has not enjoyed the success his talents deserve in the shortest format of the game, but will enter the World Cup with a brilliant opportunity to carry on his brilliant form.

Chris Lynn is THE form batsmen of the current Big Bash tournament and MUST be on the plane to India. The 25 year-old is playing a lone hand for the Brisbane Heat and his brilliant knock against the Hurricanes was one of the best I’ve seen in the format. At only 25 years-of-age, Lynn is the centrepiece of the future of Australian cricket, at least in the limited overs formats.

At 33, Bailey would be the second oldest player in the line-up after Klinger (35) but he simply cannot be overlooked. His experience both with the bat and having captained the side will be valuable, and his form in the Big Bash has been brilliant. He managed to score 62 of his side’s total of 91 against the Sydney 6’ers showing that he can score runs in any situation or setting. May be overlooked for Marsh or Khawaja, but I would be selecting Bailey.

Although he was unable to live up to his nickname of ‘the finisher’ recently against the Thunder, Faulkner’s ability to win games from seemingly hopeless positions is second to none. Equally as handy with the ball as he is with the bat, Faulkner is an automatic selection must like Warner and Smith. He was not called upon heavily in the one day World Cup with the bat, but his 10 wickets at an average of under 20 gave great support to his front line bowlers.

Although many on social media make light of the way he has been dismissed recently, it is often forgotten just how good a cricketer Glenn Maxwell really is. He was the countries number three run scorer in the one day World Cup, and has already registered a half century in the Big Bash when he scored 50 off just 36 balls against the 6’ers. His ability to take wickets should also not be understated. His 2-28 against the Thunder were his side’s best figures against a big hitting line-up.

Has been limited to just the one Big Bash appearance due to test commitments but Marsh will enter the tournament vying for one of possibly three all-rounder positions in the line up. He will likely be used mainly as a pinch hitter later in the inning, although can come in to move the run rate along if Warner and/or Finch fall cheaply. Can also take a wicket, often early in his spell, and much like Faulkner, his slight change in pace will present a different threat than the opening faster bowlers.

This was the hardest choice to make, whether to go with one more all rounder or add another specialist bowler. I hedged my bets here as I consider Hastings a genuine front-line bowler, who is able to hit any bowler high into the stands. The 30 year-old has a strike rate of almost 180 with the bat at international level to go with his incredible bowling economy rate of 6.60. I have him just ahead of Dan Christian as the fourth all-rounder in the squad due to his ability with the ball.

This was a tough call as Brad Haddin, Matthew Wade and Travis Head could all do the job, but I went with the Tasmanian, Tim Paine. Paine slaughtered the Brisbane Heat bowling attack in scoring 87 not out from 58 balls and scored another 25 in his most knock, also against the Heat. The fact he has taken the gloves in a side also featuring Kumar Sangakkara and Ben Dunk shows how highly his work behind the stumps is regarded.

If Mitchell Starc is injured, Behrendorff should be the first bowler picked to travel. His consistent brilliant performances with the ball in the Big Bash are a thing of beauty, especially considering all the advantages batsmen take into the format. He takes regular wickets in the power-play, which is something that batting teams absolutely loathe. He could be a real key to success at the tournament, which should be the start of a promising international career.

25 year-old James Pattinson could very well have a mountain of extra caps in all three formats of the game, if not for a horror run with injuries. If Starc is unable to play, Pattinson will be charged with being Australia’s spearhead, looking for wickets. Deadly with the new ball, Pattinson is the kind of bowler you can bowl his four overs straight if he is on song. Extremely quick, and aggressive, Pattinson will be one of the favourites for most wickets at the end of the tournament.

Hazlewood’s international career economy rate of over 9.5 isn’t a fair indication of just how good a bowler he is. Having improved in the past 12 months, he’d be in my squad without any hesitation. Another who can take wickets early, Hazlewood also offers a more consistent line of attack that the likes of Pattinson. With Australia likely to only play two quicks, with Marsh and Faulkner adding pace options, Hazlewood, Behrendorff and Pattinson could form a lethal rotation throughout the tournament.

I was tempted to name two spinners, but with Glenn Maxwell in the side, one spinning option is probably enough, and Lyon is the best Australian spin bowler in any format of the game. His record breaking figures of 5-23 against the Hurricanes, a side that contain the likes of Paine, Sangakkara, Dunk and Bailey, highlight his abilities in the shorter format. Long pigeonholed at a test bowler, it’s time to unleash Lyon on traditionally spin friendly (although I suspent most pitches will offer very little to bowlers in this format) conditions.