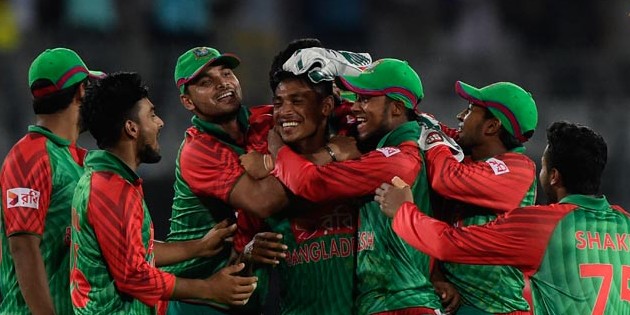 Bangladesh has thrashed India by 79 runs in the first ODI overnight in Dhaka, thanks to five wickets from debutant Mustafizur Rahman.

The 19-year-old paceman recorded figures of 5-50, to become the seventh youngest bowler to take a five wicket haul in a One Day International, as he helped Bangladesh bowl the tourists all out for just 228 in the 46th over.

Earlier, Bangladesh won the toss and elected to bat and were bowled all out for an impressive 307.

They were complimented by important cameos from Shakib Al Hasan (52), Sabbir Rahman (41) and Nasir Hossain (34) through the middle of the innings.

India started their run chase well, thanks to a 95 run partnership from opening pair Shikhar Dhawan (30) and Rohit Sharma (63). However, they lost their next four wickets for 27 runs, to see India five wickets down for just 128.

Raina and Jadeja then steadied the innings slightly with scores of 40 and 32 respectively, before both batsmen were dismissed within consecutive balls by Mustafizur to make it 7-188.

The tourists were eventually bowled out for 228 after 46 overs, with Mustafizur completing an impressive debut, taking five wickets.

Bangladesh captain  Mashrafe Mortaza was not surprised by the outstanding performance of the 19-year-old.

"Mustafizur was not a surprise for us. We know he can destroy any batsman," said Mortaza, who also praised his own side's "brilliant" start in the first innings.

The second ODI is on Sunday June 21, 3pm local time.

See the full scorecard at www.cricket.com.au