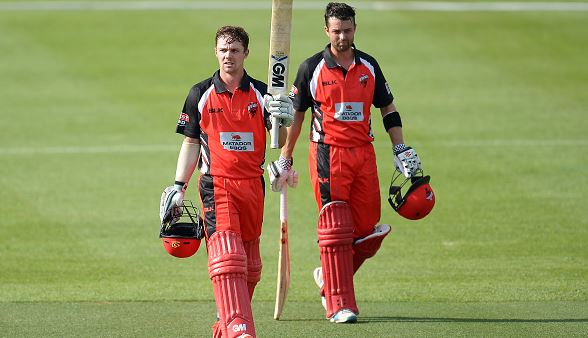 Week one of the Matador BBQs One-Day Cup 2015 is over and as expected, it was a hell of a lot of fun.

As thought, New South Wales dominated with the return of Test stars such as Mitchell Starc and Steve Smith. They are the only team to remain undefeated through four matches.

The Cricket Australia XI recorded their historic first ever win in spectacular fashion, downing Tasmania in a last over thriller.

But who from each of the seven teams have been the standout performers of week one of the Matador Cup?

The standout batsman of the competition so far has been Steve Smith.

Smith was on fire with the bat through NSWs’ first two matches, scoring centuries in both matches.

The highlight of his week was 143 not out against the Cricket Australia XI on the first day of the competition.

Closely following Smith is the man who has provided us with the best knock so far this year, South Australia’s Travis Head.

His 202 against Western Australia, also on the first day of the competition, is so far the benchmark batting performance of the tournament.

Unfortunately he let himself down on Sunday against Queensland, only managing 12 before losing his wicket to Billy Stanlake.

Already lauded as a future Test opener, Cameron Bancroft showed us glimpses of his batting talent in the 50 over game this past week.

Bancroft lit up Hurstville Oval with 176 against South Australia, good enough for the second-best knock of the comp so far.

Again, he couldn’t back up his big knock, only managing five against NSW at Blacktown, but definitely keep an eye out for Bancroft for the rest of the tournament.

He is one of five active Australians with an ODI average over 40, but somehow, Callum Ferguson hasn’t played international cricket since 2011.

He’s been putting his hand up ever since and continues to do so this year in the Matador Cup.

Ferguson has been both consistent and brilliant so far this tournament, ranking in top five in runs made, high scores and batting average.

Clearly the best with the ball so far in this years’ Matador Cup, Mitchell Starc ranks number one in most wickets, best bowling figures in an innings and best average.

Highlights this tournament so far include six wickets against the hapless Cricket Australia XI, and 19 in the tournament all up, while also conceding just 114 runs.

Look for him to rip through plenty more batting orders before the tournament is done.

Spearheading Victoria’s attack at the Cup this year is paceman James Pattinson.

In a tournament where nothing has looked spectacular next to Mitchell Starc, Pattinson has been impressive, second in wickets taken and third in both best figures and average.

If Victoria is any chance to challenge the New South Welshman for a Cup that already has their name on it, Pattinson will be looked to for inspiration.

Gurinder Sandhu is building himself a reputation as one of Australia’s most exciting young bowling prospects and has been building that reputation this tournament.

The tall quick is another appearing in the top three for wickets and averages and his consistency has added to the danger NSW pose.

Together with Mitchell Starc, he will be looking to build up chemistry for state and country, echoing similar feats of the past from two men by the name of Lillee and Thomson.

One may call bias including three New South Welshman in this section of the article, but that has just been the measure of their attack in this year’s Matador Cup.

Sean Abbott has not stood out bowling in the same attack as Starc and Sandhu, but his consistency is what earns him a spot on this list.

He is one of four men (yes, the other three also on this list) to average under 10 with the ball, the next best mark being Andrew Fekete’s 11.66. This says just as much about NSW’s attack as it does Abbotts’ skill with the ball.