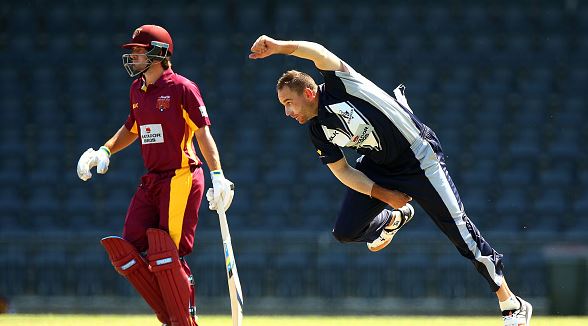 The first name on this list in week one and now week two, Steve Smith has been relentless with the bat so far in the One-Day Cup.

Despite sitting out New South Wales’ last match, he has an average well over 100 and the second most runs in the competition.

NSW will look to Smith if they are to complete their fabulous Cup by winning the final at North Sydney Oval on Sunday.

With Western Australian in a spot of bother on the table at the beginning of the week, 32 year-old Shaun Marsh stepped up to almost single-highhandedly drag the Warriors up the table.

Whilst WA are unlikely to make the final, Marsh has kept himself in international calculations with a strong Matador Cup performance.

This week, Nic Maddinson did plenty to stake his claim for more international cricket in 2015-16, highlighted by 118 not out against Tasmania.

The 23 year-old left-handed opening batsman is in the top four for both runs scored and average, and has been NSW's second best with the bat this summer.

This is exactly the kind of form Maddinson will be looking to take into shield cricket, which will surely test his worth as a future Australian cricketer.

Despite cooling off with the bat a bit this week, Bancroft has been consistent enough to keep his spot high up the batting rankings, affirming that he surely has the talent to forge a real career for himself.

His reliability has been one of the main reasons WA have clawed their way back into a respectable position on the Matador Cup table.

He will likely be in the next international squad Australia will announce, and is in good form heading into the all-important Sheffield Shield season.

Mitchell Starc continued his world-beating form this week and has now struck 23 times with the ball this tournament – more than double his nearest competitor.

This is exactly the kind of play everyone expected from Starc when he suited up in the Sky Blue, and he has not failed to deliver.

His bowling, along with Steve Smith’s batting, will go a long way to winning NSW their first domestic One-Day Cup in 10 years.

Perhaps a surprise through the second week of proceedings, but certainly a welcome one for Victoria, John Hastings has proved himself vital to Victoria's success in this year’s tournament.

His bowling went a long way to causing the boil over of the tournament so far, when his Bushrangers knocked off NSW at North Sydney on Sunday.

They have proven they can beat the best and Hastings has proved himself a match-winner with the ball. He will need to replicate these feats if Victoria is going to cause another upset and win the tournament.

Retaining his spot on the list for another week is NSW’s other standout bowler from the tournament, Gurindner Sadhu.

Whilst the wickets have somewhat dried up, Sandhu has managed to keep the run rate down, which is a quality international selectors will be impressed with.

Sandhu already has a one-day international to his name, and will be looking to have a big Shield season to impress international selectors for the longer format.

Another Victorian who has been pivotal to his team’s success, Jon Holland, has built up a lethal attack with his teammate John Hastings this season.

Throw strike bowler James Pattinson into the mix and you have an attack capable of challenging NSW for supremacy.