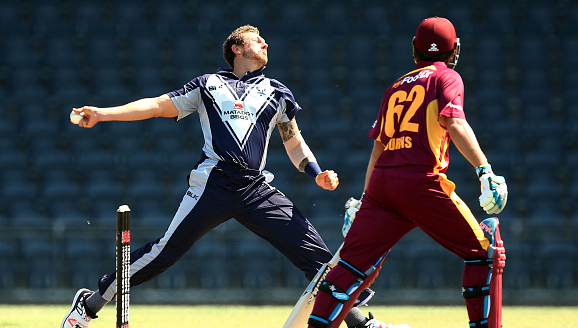 Victoria has suffered a 29 run defeat to Queensland in the Matador Cup, despite an impressive performance from paceman James Pattinson.

Victoria won the toss and elected to field, bowling Queensland all out for just 209 on a very slow wicket at Blacktown International Sports Park.

James Pattinson struck first for the Bushrangers, removing Chris Hartley for a duck in the third over.

Peter Forrest top scored for Queensland, scoring 57 from 71 balls. However, when Maxwell removed the former Australian international, to make it 6-181, the Bushrangers removed the tail with ease, to restrict the Bulls to 209, claiming the final wicket with last ball of the innings.

Pattinson starred with the ball once again, taking four wickets, to make it eight scalps in two games, while Hastings and Maxwell took two wickets each.

Victoria struggled in reply and looked set for a heavy defeat, languishing at 7-79 after 24 overs.

However, the Bushrangers recovered somewhat to make for an intriguing finish, thanks to an impressive 56 from Matthew Wade and 44 from James Pattinson.

But it was too little too late from the Vics, eventually being dismissed for 180 runs in the 41st over, 29 short of Queensland's total.

Queensland's next match is on Sunday against South Australia, while Victoria face Western Australia on Monday.

Clicker here for the full scorecard