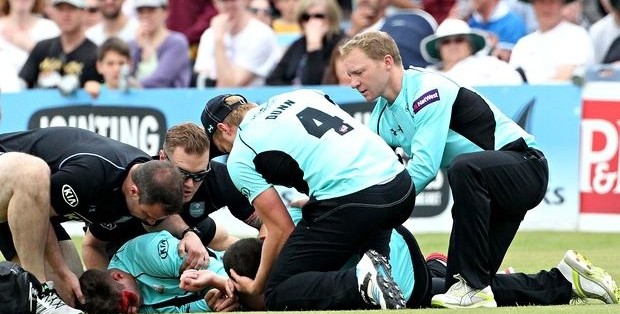 Surrey cricketers Moises Henriques and Rory Burns are said to be recovering well following a sickening collision during a domestic T20 match on Sunday.

The pair collided while attempting to catch a high ball in the outfield.

Sussex physiotherapist John Marrale told The Guardian that “both were unconscious after the collision.”

"Henriques was caught by Burns’ knee and Burns had lacerations on the top of his head and below his eye.

"They were given oxygen and pain relief before they went to hospital. Fortunately they were sitting up when they left the ground but it was a sickening incident,” Marrale said.

"Latest news on the two boys ... both Rory and Moises are in decent shape following their operations overnight.”

“Both of the lads are in good spirits and bearing up well.”

Henriques is still in hospital and will require further dental surgery, while Burns was discharged from hospital yesterday.