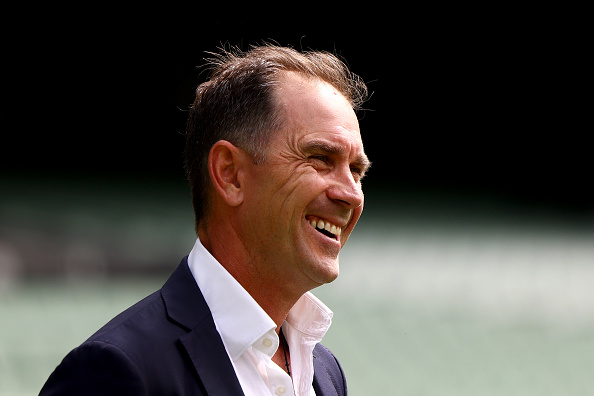 Channel 7 have confirmed that Justin Langer will have no restrictions on interviewing players as part of his new role with Channel 7.

Langer left his post as Australian coach at the end of the 2021-22 summer of cricket after a reported falling out with the playing group over his coaching style.

Andrew McDonald has since taken over, with a failure to back up the T20 World Cup victory in the United Arab Emirates last year, this time on home soil, raising significant questions.

McDonald's future could hinge on the next 12 months, with Australia set to take on the West Indies and South Africa at home in the red ball format this summer, before heading to India for the Border-Gavaskar trophy, England for the Ashes and a possible World Test Championship final, and then back to India for the ODI World Cup.

Failure to land good results throughout the biggest series on the cricket calendar or World Cup could land Australia looking at more change from the top.

Langer this week labelled players as "cowards' for leaking stories to the media during his time in charge of the team, but despite that, Channel 7 CEO James Warburton told News Corp that Cricket Australia would be in breach of a multi-million dollar contract if it refused players to be interviewed by Langer.

“Justin is not there to criticise the players,” Warburton said. “He's there to take the viewers into the dressing room and behind the scenes from his experiences.

“Justin is also free to talk to the players with the rest of our commentary team.

“Cricket Australia would otherwise be in breach of the broadcast contract. They've got to make the players available.

“It's not in our interests to have a barney with anyone. We're paying top dollar for the rights so it's wrong if they're not talking to us.”

The warning from Channel 7 is just the latest in a string of issues with Cricket Australia which has seen legal action and an attempt to break the broadcasting deal, mainly over the quality of the Big Bash League, which has suffered dramatically from a lack of star international players, owing to both a drawn out fixture list and the coronavirus pandemic which shut international borders.

This year's edition of the BBL is beginning to look on shaky ground as well, with Liam Livingstone, David Willey and Laurie Evans - all of whom were picked up by clubs with their respective first picks at the inaugural international player draft - pulling out of the tournament in recent weeks.

While none of the players have pulled out to play in other international tournaments, Cricket Australia is also facing threats from Cricket South Africa's new T20 competition, and the ILT20 in the United Arab Emirates. Both tournaments will be held in January, a window of the year that Cricket Australia used to hold exclusively when it came to franchise T20 cricket.

Langer will begin his work with Channel 7 for the first Test against the West Indies in Perth on Wednesday.