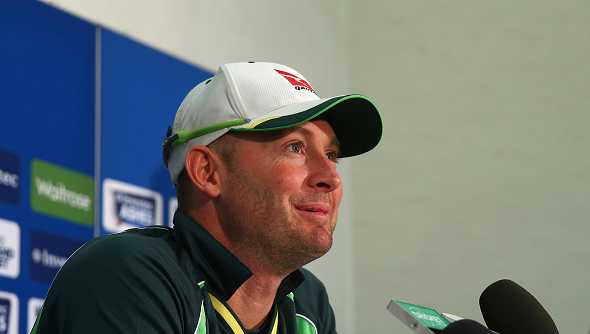 After the close of play yesterday, Australian captain Michael Clarke told the media why he changed his mind and decided it was time to retire.

Clarke had been adamant he was going to play on, writing this week in his column for News Corp Australia: “People are talking about how I’m going to retire after this series, well they don’t know me."

“A big reason for me retiring from one-day cricket was to prolong my Test career, and I still love playing and competing at the highest level."

However, just a few days later the Australian captain called time on his decorated career.

“It’s not like it’s been coming for the last six months,” Clarke told a packed media conference after England obliterated Australia in the fourth Test to win back the urn.

“Win or lose I might still be sitting here saying the same thing.

“As captain of the team, my performances have been nowhere near the level and the standard they need to be an Australian cricketer and to be captain.

“The boys have worked hard, I don't blame anyone in that change room.

“As a team we haven't performed as well as we needed to be beat England, and as a captain I certainly haven't led from the front.”

“I tried to be as positive as I possibly could right to the very end,” Clarke said in response to questions about his News Corp column in which he declared he would not be retiring.

“For the team’s sake for my sake as well, I wanted to give myself and the team every opportunity to come out here and play our best cricket in this Test match.

“I wanted to send a really positive message to my teammates so I thought that was the right thing to do at the time and throughout this Test match.

“I don’t feel sad, I’m more disappointed with the way we played through this series and the way I played as captain.

“That’s the most disappointing part.

“I believe it’s the right decision for Australian cricket, and for me.”

Clarke is expected to play at The Oval in what will be his 115th and final Test match for Australia. He has captained Australia in 46 Test matches, making him the sixth most capped Australian skipper.