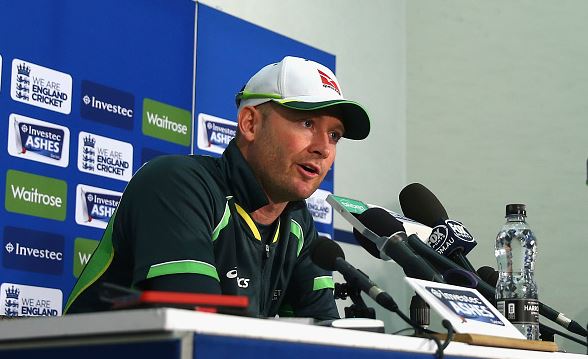 News Corp reported on Sunday night that the 'real reason' that Clarke retired was due to several off-field related issues.

Theses included; a long running feud between two senior players' wives, Clarke's refusal to socialise with teammates or travel on the team bus and the axing of wicketkeeper Brad Haddin.

However, Clarke labelled the reports a "a load of s**t".

"When you don't perform there's always going to be Chinese whispers and 'he says, she says'," Clarke told Triple M Melbourne's The Hot Breakfast.

"I can guarantee you the feeling in this group is exceptional. There's no disharmony in this group whatsoever. The players are as tight as any team I've been a part of.

"Travelling in different cars? What a load of s**t.

"Wives and girlfriends being on tour is a distraction? What a load of s**t. That's absolute garbage.

"More importantly to me, the way Brad has handled himself is a credit to any international player that gets dropped. He's gone out of his way to help Peter Nevill, he's stuck to the group, he's still very vocal in team meetings to help the team move forward.

"It is tough for me because as I say I'm emotionally attached to him. I grew up as a 17-year-old boy I started training and playing with Brad Haddin and he's always been a part of the teams I've been in. So it's tough.

"Selectors made it clear that they made their decision based on cricket performance and they thought it was the right decision.

"I respect and understand that when you don't perform as a team, there's always going to be questions but at the end of the day it comes down to performance."