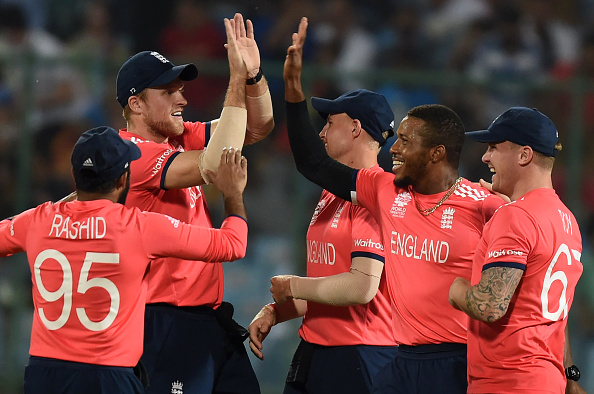 It's looking increasingly likely that England might well experiment with three spinners at some point in this World Twenty20, with conditions in India continuing to favour those slower bowlers.

Having suffered an opening game defeat to the West Indies, Eoin Morgan's men secured a crucial win over South Africa in spectacular fashion as they chased down the second highest score in the tournament's history to record a two-wicket victory over the in Mumbai. But with one foot now in the semi-finals, England are prepared to play three spin bowlers at some point in the tournament if the conditions call for it.

As ever in the sub-continent, slow bowling has been a major factor in the competition so far. This is opening the door for Liam Dawson to join Adil Rashid and Moeen Ali in the team. While neither of England's two spinners have taken huge amounts of wickets so far in the tournament, both Rashid and Moeen have done respectable jobs when called upon. For Dawson, his inclusion in the squad was something of a surprise in February. But the 26-year-old may yet have a role to play for England over the next few weeks.

The Hampshire all-rounder was named in the squad for the World Twenty20 despite head coach Trevor Bayliss having never seen Dawson play in a competitive game. Having earned some very positive reviews for his performances with the England Lions earlier this year, the left-armer is yet to make an appearance for the senior team. However, the talk coming out of the camp suggests Bayliss wouldn't have any problems with throwing the uncapped all-rounder into the action if he felt it was the right call. Dawson again looked particularly strong in the shortest format of the game for Hampshire last season, and his name has been in the mix with England for a couple of years now.

Priced at around 8/1 with the betting odds to win the tournament in the wake of beating South Africa, England have already shown that they have a batting line-up capable of taking apart any bowling attack. In Joe Root, Jos Buttler and Jason Roy, England have three batsmen who have looked in great form since the start of the tournament. If the bowlers can stop opponents scoring more than 200, we could be looking at a team with a real chance of upsetting the odds and going all the way.

England have been looking for a clear number-one spin option since the retirement of Graeme Swann, who played such an important role in their 2010 World Twenty20 triumph. After an impressive spell in Australia playing in the Big Bash with the Adelaide Strikers, Yorkshire all-rounder Rashid was expected to be England's premier spin option in this tournament. While he hasn't yet taken the wickets he would have wanted, the 28-year-old has been a reliable bowler for Morgan. That is something that isn't always easy when bowling against the best batsmen in the world in this format of the game.