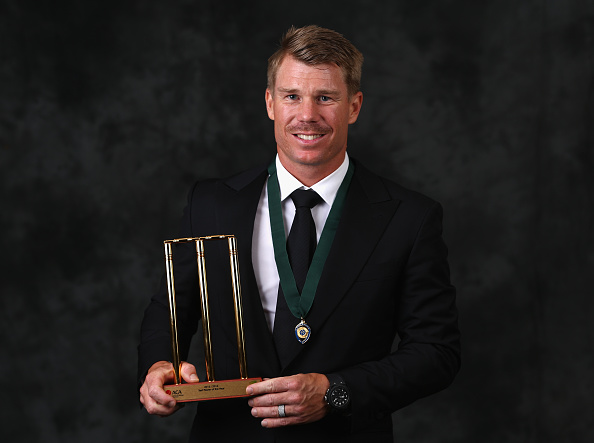 Warner has apologised to Carlton and United Breweries for appearing to grimace or wince after taking a sip of beer at last night's AB Medal, which was caught on camera.

"I think I have to apologise to Crown Lager," Warner said today.

"They caught me sort of scrinching my eyes.

"But I’m still off the booze.

"It’s something that I wanted to accomplish myself to see if I can do it and it’s a lot easier now than it was in the first month."

Warner has been on a self-imposed alcohol ban since early last year. However, he was handed a bottle of Crown Golden Ale when he was named winner of the Alan Border Medal.

"I gave myself an opportunity to try and get through this year without any soft tissue injuries, and obviously breaking a thumb is not ideal," Warner said.

"In the past, you can do a lot of stupid things when you’re out there and you’re on the drink.

"I wouldn’t say I got out of hand a lot, but it’s the discipline side of things to tell myself and show myself that I was capable of doing that.

"It’s just something that I was trying to get through the tours (we’ve had) and the tours that are coming up you don’t want to have a disadvantage in any way.

"I’m trying to put my best foot forward and get my body right for my team."