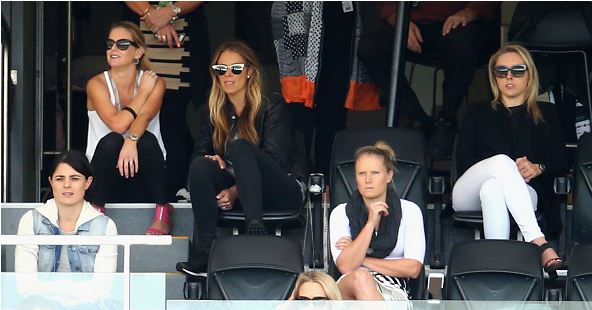 Since Australia surrendered the Ashes to a far superior English side, the search for answers has begun.

Plenty of excuses have been offered up, but by the far the most ridiculous is the notion that somehow the wives and girlfriends of the players are responsible for the batting collapses.

Surely I can’t be the only one who sees this being offered up as an excuse as an absolute cop out.

Simply put, England handled the conditions far better than the Aussies, who at times looked like complete amateurs against the Duke ball.

Some in the media, and especially on social media, are so busy looking for scapegoats that the bleeding obvious has been overlooked.

Australia batted like they had somewhere else to be. England’s bowlers put the ball in the right areas, and our batsman looked all at sea.

In no way did the presence of the player’s wives, girlfriends and families have any effect on the result of the series.

If it were ok to blame the presence of wives and kids for poor job performance, you know who could blame such a thing for said poor performance?

Literally everyone who lives with their partner and kids.

Candice Falzon was not responsible for David Warner playing a poor shot.

This ashes tour has been a long one. Five tests, plus tour games, plus limited overs for those who qualify.

That doesn’t even take into account the tour of the West Indies, as well as upcoming tours.

It’s a long time for anyone to be away from their family.

Why should the Aussie cricket side be forced to stay away from their loved ones just because they’re good, last two tests aside, at hitting a leather ball with a wooden bat?

To use the Warner example again, Dave and his wife have a young child. Is it fair for that child to be forced away from her father during her early years?

Is it fair for Warner to be split from his pregnant wife and daughter? No!

Not to mention the very obvious fact that the players' families were there when Australia wiped England off the park in regaining the Ashes 5-0 in Australia.

If anything, the presence of the players’ families would be a calming effect. The entire notion of playing away is that you will be uncomfortable.

By ensuring the players are surrounded by loved ones, cricket Australia has done all it can to ensure players feel as comfortable as possible.

If you’re looking for a reason for Australia’s inability to bat in the final two tests of the series, look no further than the fact that players are too busy playing pop gun T20 tournaments across the globe.

Players used to head to England to play country cricket in the Australian off-season. The large majority no longer do this, but instead partake in hit and giggle tournaments such as the IPL.

I am a fan of T20 cricket, but test cricket is, and always will be, the pinnacle of our game.

Chris Rogers has played more county cricket than any other member of the Aussie cricket side.

I’ll give you one guess who has been our best batsman throughout the series.

To blame the partners and families of our stars is an absolute cop out of the highest order.

England mastered the conditions much better than the Australians did, especially with the bat.