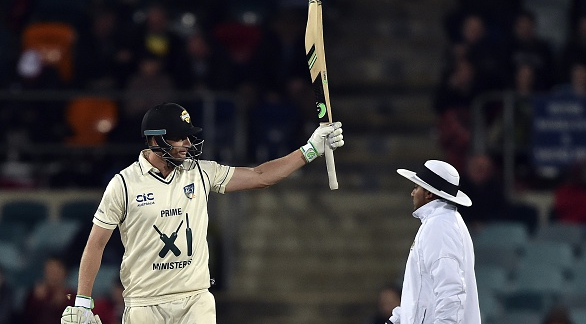 Australian Test batsman Adam Voges has launched a scathing attack on the pink ball after yesterday's match between New Zealand and the Prime Minister's XI.

The incumbent Test batsman didn't hold back when asked his thoughts of the ball, which he said deteriorated quickly and was "more green than pink" by the end of the innings.

His assessment creates concern whether the ball will last 80 overs in the Test match under lights against the Kiwis in Adelaide late next month.

"There wasn't much pink on it by the end of the game," Voges said.

"The one that got hit on the roof which didn't come back was 28 overs old, and it looked like it was 68 overs old.

"To be honest, it didn't hold up very well tonight.

"It looked as though the lacquer had come off and it was turning green, there was probably more green than pink by the end.

"It stopped swinging after ten overs and there was no reverse swing, because both sides got chunked up just as much.

"Those first ten overs were a real challenge but once the ball stopped swinging it was a lot easier and both balls got chewed up pretty quickly after that."