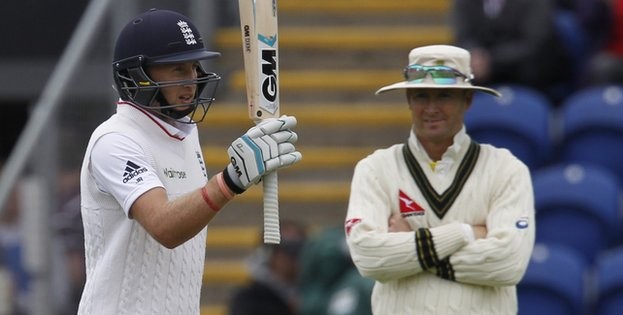 England has reached 7-343 at stumps on day one thanks to a blistering century from batsman Joe Root.

English fans could be forgiven for feeling a sense of deja vu, with Australia well on top after the first hour.

Josh Hazlewood struck first for the tourists, removing opener Adam Lyth when he was caught by David Warner for just one to make it 1-7. Michael Clarke threw Nathan Lyon the ball early on and he repaid the skipper's faith, removing captain Alastair Cook for 20. Starc the chimed in the very next over to dismiss to dangerous Ian Bell for just one when he was trapped in front in the 15th over.

Australia was well in command at 3-43 and they should have made it four when Joe Root was dropped on naught.

Root edged a wide, fullish ball from Mitchell Starc, which had veteran keeper Brad Haddin diving away to his right. He lunged with his right arm as he tried to take the catch with one hand, but the ball bobbled out of his glove.

The dropped catch, which Haddin would admit he would normally take, proved extremely costly, with Joe Root going on to make an exquisite century to get the hosts right back in the match.

Root hit the Aussie bowlers to all parts, as he scored 134 off 166 balls. His innings included 17 fours in a display of controlled, yet aggressive batting.

The 24-year-old was helped by Gary Ballance (61), who combined with Root for a fourth wicked partnership of 153, before he was trapped lbw by Hazlewood for his second wicket of the day.

Root however, continued on his merry way, combining with explosive middle order batsman Ben Stokes for an 84 run stand.

Root was eventually dismissed for 134, with Starc grabbing the crucial wicket via an edge to Shane Watson.

Australia then snared two late wickets to launch a small counter attack of their own, dismissing Stokes for 52 and then Butler for 27.

Starc and Hazlewood were the pick of the bowlers, each grabbing three wickets, while Lyon picked up one scalp.

Australia will want to get quick wickets when play resumes on day two, to try to restrict England to a score of under 400.

Regardless of the outcome of this Test, England has proven it may be a much closer series than many predicted.