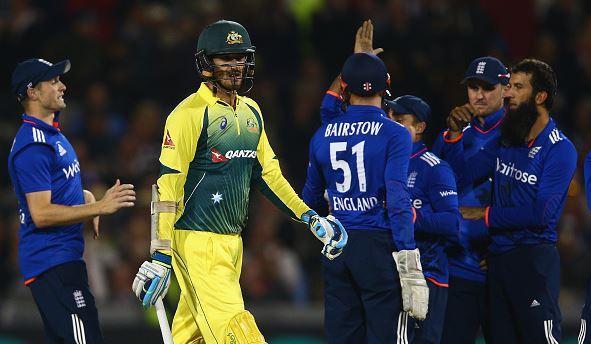 England has claimed a massive 93-run win over Australia in the third ODI at Old Trafford.

The hosts won the toss and elected to bat, reaching 8-300 off 50 overs, before Australia was bowled out for 207 runs.

Maxwell and Cummins both two wickets for Australia, while Starc and Agar took one each.

In reply, opener Joe Burns couldn't continue the form he displayed his three two ODI matches, being dismissed for nine. Fellow opener Aaron Finch scored 53 in his return to the side from injury, while Smith (25), Bailey (25) and Maxwell (17) all made starts but failed to push on.

Matthew Wade made a quick fire 42 from 41 balls, but it was all the resistance Australia could provide, eventually being dismissed for 207 off 44 overs.

Plunkett and Ali both took three wickets and Finn and Rashid took two wickets each.

England now trail 2-1 in the best of five match series.

The next match is on September 11 at Headingly at 7.30pm AEST.