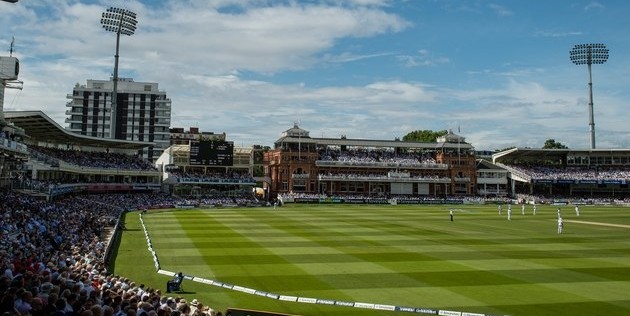 Following their side’s hammering at the hands of the touring Aussie side, English media have been calling for bowler friendly pitches for the rest of the series.

It is a direct contrast from the earlier calls from the media for curators to produce batsman friendly pitches in an attempt to limit the damage caused by the superior touring pace attack.

The about face has come after England’s bowlers only managed to take ten wickets across two Australian innings. Those ten wickets came at a cost of 820 runs.

The Aussies were able to declare twice at the home of cricket, following huge knocks from Steve Smith (215) and Chris Rogers (173) in the first innings, and a strong top order performance in the second.

The fact the Aussie bowlers managed to take 20 wickets on the very same pitch seems to be completely glossed over, proving that perhaps the pitch was not the road it seemed at times during the Aussie innings.

Only three English wickets fell due to methods other than pace bowling; two to spinner Nathan Lyon and one due to a run out.

Do English batsman really want to face Johnson, Hazlewood, Starc and Marsh on a pitch with some juice in it?

Mitchell Johnson was absolutely terrifying on the Aussie green tops in the last Ashes series. He was able to move the ball both in the air and off the pitch, and the results were devastating.

England’s top order has struggled for some time now, and has relied on brilliant knocks from one of their top five to post passable scores. The last thing they need is 150km/h bouncers whistling past their ears.

If England want to dish up green top, bowler-friendly pitches, I say YOU BEAUTY!!!

I can’t imagine Ian Bell and Gary Ballance are all too happy hearing the push to juice up pitches has hit the papers.

Yes, England’s bowlers would likely improve their efforts and figures on more bowler friendly pitches, and yes the Aussies got the best of the conditions during the second test, but I would back Johnson, Starc and Hazlewood any day.

The Aussies look like they will head into the third Test with an unchanged line up, assuming Chris Rogers will be available.

The same cannot be said for the English side, who look like they may be looking to make some changes to shift the momentum back to their side.

Gary Ballance has been axed, while Adam Lyth faces uncertainty as to his selection, while Moeen Ali may be filling a different role.

There is a real chance that England may bring in another bowler, and push Ali up the order to play as a batsman who will chime in with a few overs.

It could completely change the dynamic of this series heading into the third Test. If the third test produces a winner, it’s going to be incredibly difficult for a side to come back to win the series, especially if it is Australia that emerges victorious.

England performed much better in the first test and it would be a little rash to say they can’t win the third Test.

That being said, if England do stick by the same team that copped an absolute hammering at Lords, they may risk losing the series over the next five days of cricket.

Win the toss, win the test

Whichever way the curators go in preparing the pitches for the rest of the series, I would really like to see an even contest between bat and ball.

Ashes Tests in England, for far too long, have been a matter of win the toss, win the Test.

The old saying goes, nine times out of ten if you win the toss you choose to bat straight away … the other time you think about it, then bat.

I would love to see a green top pitch for the third test that puts genuine thoughts of bowling first into the mind of whichever captain wins the toss.

England outplayed the Aussies in the first test, and the Aussies were far superior in the second, but you do have to wonder what would happen if the toss had gone the other way in both matches.