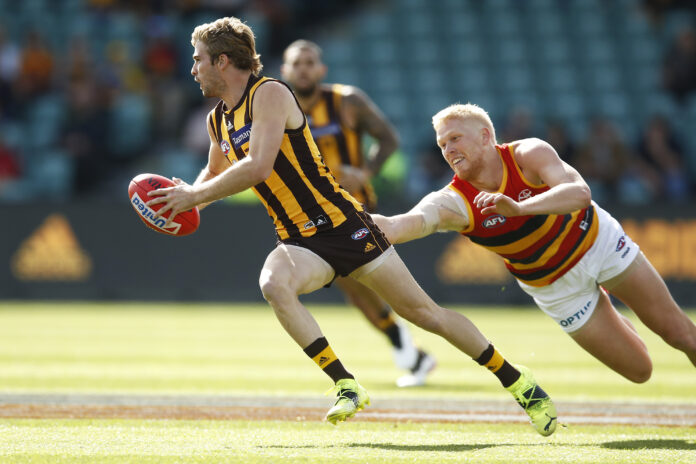 Former Hawthorn AFL forward Oliver Hanrahan is set to remain a Hawk this summer, however, he will do so after crossing codes to Victorian Premier Cricket outfit the Kingston Hawthorn Hawks.

As first reported by News Corp on Tuesday, the 23-year-old will trade the Sherrin for a four-piece after being delisted by Sam Mitchell's side at the cessation of the 2021 season.

Across his 29-games in brown and gold, Hanrahan was renowned for his ability to both hit the scoreboard and provide flexibility elsewhere afield.

And given his ability to both face-up as a right-handed batter and throw down medium-paced deliveries, this same malleable skillset is set to translate this summer.

With his past experiences playing Hatch grade, APS school sports and with the Melbourne Club, the quality of the competition he is certain to face this season is unlikely to faze Hanrahan.

“I take my cricket pretty seriously,’’ he told The Mordialloc Chelsea Leader.

“[I] absolutely love it and I missed it while I was in the footy system. I’m just really excited to get back out there and play and maybe give the Kingston Hawthorn boys some leadership.’’

While Hanrahan's addition to Peter Marshall's line-up has secured his weekends for the near future, the St Kevins' graduate stated that his future in the winter code remained less than certain.

"I was hoping to get another chance [at AFL level], definitely,’’ the former pick 14 said.

“I was pretty disappointed when I didn’t get picked up in the trade period or the draft, but at the end of the day it opens up new opportunities.

“I had four or five clubs pretty interested the whole way but there was a lack of list spots and I didn’t get offered another gig.

“I’m dealing with it pretty well, to be honest. I guess now I just have to weigh up what I want to do now with my footy, whether that be VFL or local or whatever. I have to sit down with the family and figure that out.’’

Hanrahan is expected to make his debut when the Kingston Hawthorn Hawks play host to Essendon at Walter Galt Reserve in Mordialloc this Saturday.