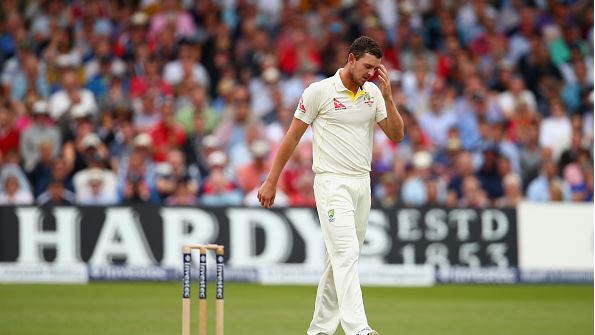 Australian fast bowler bowler Josh Hazlewood has been ruled out of the fifth Test at the Oval with "niggling problems."

Pat Cumins is expected to come into the side to replace Hazlewood.

"Josh has played six Tests since the West Indies Tour and the last nine Tests for Australia, as well as playing an important part in the World Cup," Australian coach Darren Lehmann said in a statement.

"He has managed to get through this period without any major injury which is pleasing, though currently he does have some niggling problems that we would like to manage.

"As such, he was not considered for selection for the fifth Test.

"On his return to Australia his niggles will be investigated further and he will work with our coaches, and our medical and fitness staff to have him prepared for the next series he is selected to play in."

English paceman James Anderson has also been ruled out of the final Test.