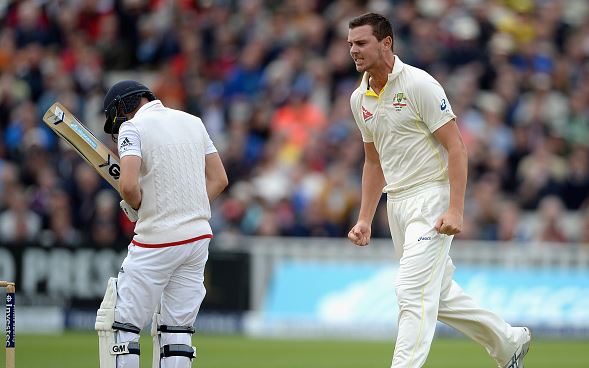 Josh Hazlewood says he has learned a valuable lesson on this year's Ashes tour as the fast bowler seeks to regain his spot back in the Australian Test side.

Hazlewood missed the fifth Ashes Test with a niggling injury and didn't take part in the one-day series with England, following a poor display at Trent Bridge.

The 24-year old took 2-97 off 24 overs and was uncharacteristically wide and sloppy. The paceman is known for his consistency with the ball that has drawn comparisons with Australian legend Glenn McGrath, who he himself said that Hazlewood's search for swing in English conditions hampered his bowling.

"Here it just looks like he was coming in with a little wider run up and trying to swing the ball coming from the arm, getting a little bit lower and not powering through the crease the same way and unfortunately not the same bounce," McGrath said.

"I'd like to see him go back to hitting the deck more. If he can get a little more outswing, great, but make sure you don't lose that bounce."

Hazlewood has been rested for Australia's upcoming tour of Bangladesh which begins next month. Instead the 24-year-old will represent the NSW Blues in the domestic one-day tournament.

"It's the perfect time of the year, especially for bowlers, to get the ball rolling," Hazlewood said.

"If you get a few good performances early in the Matador Cup it can lead to a good Shield season or, for me last year, an international season."

Despite the series in England being a failure, Hazlewood said he took a lot out of it.

"Just learning the conditions, with the change of ball (to a Dukes) as well and the length of the tour, it was my longest time away from home," he said.

"I think next time the bowling attack will have learned a lot from how we went about it and the batters will as well."

The Matador BBQs One-Day Cup kicks off on October 5, running for three weeks.