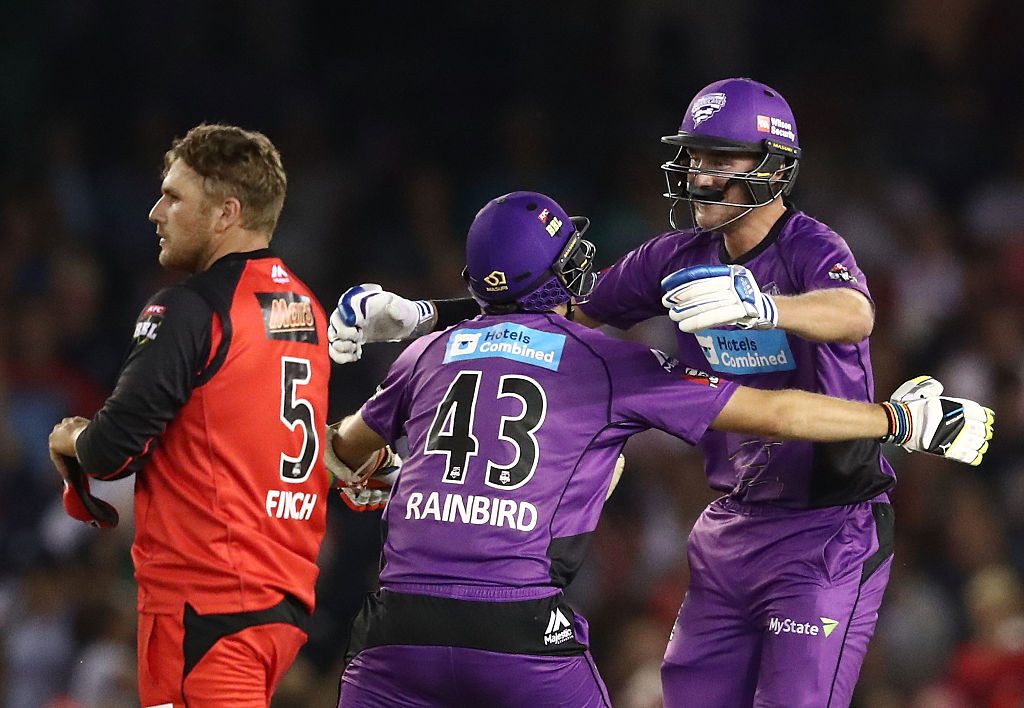 Hobart youngster Ben McDermott smashed the first century of the BBL06 season as the Hurricanes chased down the highest Big Bash League total in history to claim a thrilling final ball win over the Melbourne Renegades.

McDermott slammed 114 runs from 52 balls and Stuart Broad chipped in with the winning runs on the final delivery to see Hobart eclipse Melbourne's first innings score of 4/222.

Tim Paine won the toss for the Hurricanes and sent the Renegades in to bat on their home deck, and Melbourne started with a flurry and were smashing boundaries early.

Marcus Harris fell for 25 in the fifth over but that was the only dismissal in the first half of the innings, as Aaron Finch and Cameron White took the reigns for the Renegades.

Finch motored to 63 from 40 before he was caught behind, and White added 34 of his own to keep the home side on pace for the magical 200-run mark.

Tom Cooper batted brilliantly and was joined by Thisara Perera for the final overs of the innings, as the pair put on 42 runs from their 16-ball partnership as Cooper tallied 53 from 24 to lead Melbourne to 4/222, the highest score in BBL history.

Hobart's mammoth run chase got off to a terrible start, as captain Tim Paine fell for a golden duck with the third delivery of the innings, and when fellow opener D'Arcy Short went for 18 two overs later, the visitors looked to be dead and buried at 2/19.

McDermott and George Bailey then put on the highest third wicket partnership in BBL history, as the pair combined for an astonishing 151 runs.

McDermott blasted nine sixes and eight fours in his unbelievable innings, as his total of 114 runs is just second to Luke Wright for the highest individual score in BBL history.

His stay at the crease came to a end when he was caught lbw by Sunil Narine in the 16th over, and the momentum shifted back and forth until the Renegades looked to have sealed the win with one over remaining.

Hobart needed 16 from the final over with Cameron Boyce and Sam Rainbird both at the crease with neither player having faced a ball in the innings, and when Boyce was run out with the second ball of the over all hope looked lost.

Stuart Broad stepped in and gave it everything, slamming back-to-back fours to put his side in the position of needed just one run off the final ball for victory.

The field was brought in to surround Broad, but a leading edge saw the ball fly over everyone to long off, and the Hurricanes had pulled off one of the greatest run chases in T20 history all over the world.

If it was possible, McDermott would be getting all six votes here. He was outstanding, and this innings will go down as one of the best the BBL has ever seen.

The Hurricanes veteran kept the runs ticking over when McDermott was dismissed, and an impressive 59 from 42 kept the score in reach for the tail-enders.

If the Renegades held on, Cooper's innings would have been the major reason for the result. An unbeaten 53 from 24 helped Melbourne get past the 200-run mark and set a brilliant score.