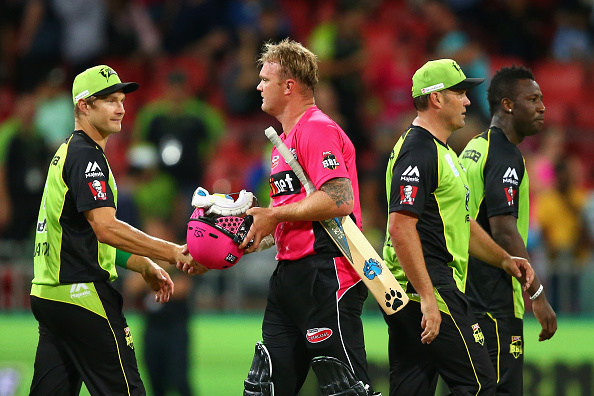 It took eight attempts, but the Sydney Thunder have finally broken their duck against cross-city rivals the Sydney Sixers.

In front of 18,287 fans at Spotless Stadium for the opening match of the Big Bash League — the Sydney Smash — the home side won by 36 runs after bowling the Sixers out for 122.

The damage was done early on by captain Mike Hussey, who hit a half century, and the job was finished off by Thunder debutants Shane Watson and Andre Russell with three wickets a piece.

In the end it was a commanding performance from the whipping boys of seasons past, but that tag isn’t likely to stick this campaign.

Hussey, the 40-year-old version, smashed an unbeaten 80 off 59 balls to steer the Thunder to their total of 4-158, before the Sixes were bowled all out for 122.