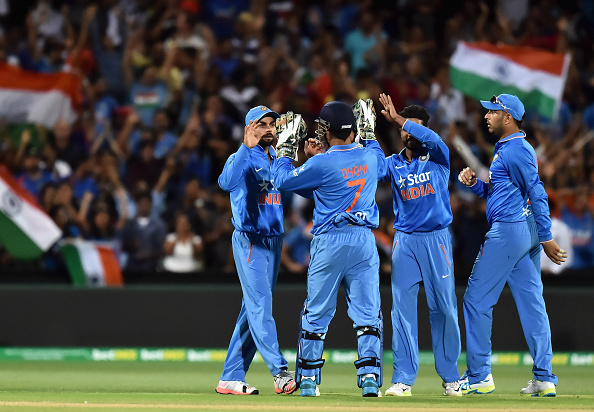 India has beaten Australia by 37-runs in the first Twenty20 International at Adelaide Oval on Tuesday night.

Chasing a target of 189, Australia were bowled out for 151 with spin twins Jadeja and Ashwin doing the damage, taking four wickets between them.

Virat Kohli smashed 90 runs from 55 balls to lead India to 3/188 after 20 overs, continuing his impressive form from the one-day series, hitting nine fours and two sixes in a powerful innings.

He was given good support from recalled batsman Suresh Raina (41) with the pair putting on 134 for the third wicket.

After Australian captain Aaron Finch won the toss and sent India in, Rohit Sharma got the visitors away to a lightning start, hitting 31 from 20 balls before he mistimed a pull short off Shane Watson and was caught at mid-on by James Faulkner.

Watson had Shikhar Darwan (5) caught by keeper Matthew Wade two balls later to leave India on 2-41, but Kohli and Raina were untroubled until Raina was bowled by Faulkner in the final over.

Skipper Mahendra Singh Dohni came to the crease and hit a six and a four from his first two balls to take India to a big toal that Australia were unable to chase down.

The series now heads to Melbourne and the MCG on Friday night for the second of three games.