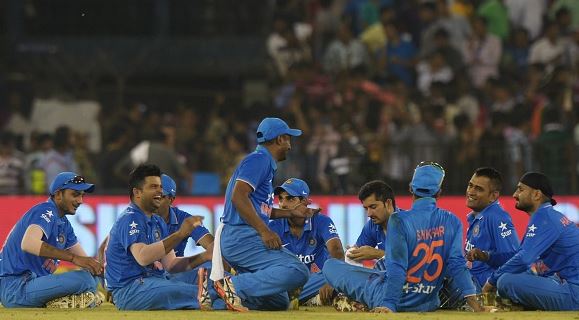 The Proteas won the match by six wickets, after bowling India out for just 92 runs, before chasing down the target with ease.

Indian fans turned on their players after their poor batting performance, forcing the game to be delayed by almost half an hour before South Africa could start their innings.

However, play was halted once again shortly after, for another half hour.

Police were reportedly forced to clear the entire upper deck of the stadium, with fans hurling bottles onto the ground from the stands.

The beaviour was met with widespread condemnation and calls for tougher penalties.

Indian great Sunil Gavaskar called for the local cricket authority to be punished.

"The police were standing there without any instructions," Gavaskar said.

"The police who are stationed on the boundary perimeter should not be watching cricket but they be monitoring the behaviour of the fans.

"Cuttack should not be given an international for the next couple of years. As a deterrent, the BCCI must also stop the subsidy to the Odisha Cricket Association."

The crowds may be upset with the way India played this evening but the way they are behaving is very disappointing. #IndvsSA

Disgusting scenes in Cuttack.... So many Venues in India.... Easy punishment...Don't let them host internationals for a few years...#SAvIND

Really sad and disappointing behaviour from fans in cuttack tonight! Scenes that should not be seen at sporting grounds. #SAvsIND

What a shame ! When we win all is good when we loosing is that how u behave ? Pl show some respect to your players and respect the game