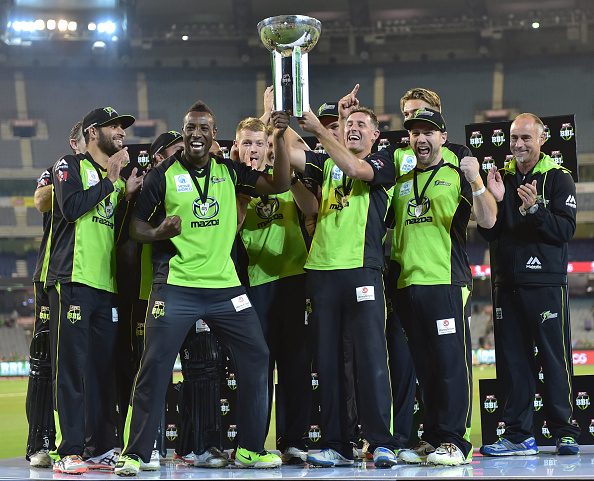 Despite being the competition’s off-season, the Big Bash League continues to roll on, after Channel 10 picked up a Logie for its brilliant coverage of the competition, and reports came out that the competition is now the most watched Australian local competition.

Although the AFL and NRL competitions dominate the winter, the revamped short form of the game, has captivated audiences and is the undisputed king of the Aussie summer.

I say this with no malice toward the round ball game, however until the A-League can secure a fulltime free-to-air deal, it is never going to match the viewership or crowd numbers that the condensed BBL does.

This year’s BBL season, I would argue, was the best yet. I say so as a member and fan of the victorious Sydney Thunder, however the season went well beyond the crowning of the ultimate underdog champions.

No one will ever forget the New Year’s Eve heroics of Travis Head, who took an almost unlosable game away from the Sydney Sixers.

Despite being remembered more for his comments on the boundary, Chris Gayle’s 50 off just the 12 balls for the Reneges was something only once seen on Ricky Ponting cricket.

Andre Russell’s heroics with both bat and ball went a long way to completing the fairy tale for those wearing electric green.

Shane Watson’s return to form reminded Aussie cricketing fans of what he can do.

Chris Lynn’s destruction of Ben Hilffenhaus will live on in highlights packages for the next decade. Seeing the young Heat batsman smoke five consecutive sixers off the former test quick would bring even the biggest doubter of the format to his or her feet in excitement.

Not to mention the fact that this year’s imports were the best the competition has ever seen.

Simply put, the 2015/16 season was amazing, which brings forth the question, is it time to expand the competition?

For that to happen, one of two things could happen. Either the competition would be lengthened allowing each team to play the other twice, or the inclusion of more sides.

Given the hectic nature of the international cricketing calendar, I don’t see the competition being lengthened by more than say a round or two, but I expect the talk of adding more sides to grow as the 2016/17 competition draws closer.

The most likely places for expansion would remain in the major cities, with second sides in Brisbane and Adelaide the most likely. A Gold Coast or Geelong side are not out of the question.

The current talent pool is very deep, with young stars being included in each and every competition. It would be stretched at first if there were suddenly another 36 or so places to be filled, however there’s also 36 more chances for young players to impress and earn contracts at Shield level.

Channel 10 have proven that they are more than up to covering the hectic schedule or fixtures, and ratings indicate that the demand for the game is extremely high.

By adding another two teams, you could make every Saturday/Sunday a double header, meaning the competition would not be lengthened persay, although more games would be played.

The increase in games would mean more advertising revenue, more revenue ticket wise, and more eyes on the product.

It would also add the possibility of drawing in more fans who aren’t yet attached to an existing team, especially if a Gold Coast or Geelong side was introduced.

Given the amount of success the competition has garnered over the past few seasons, now would be the time to have the discussion re expansion.

That being said, an increase in teams would lead to extra travel costs for sides, who would need to travel to another game every round.

There’s also the possibility that the extra fixtures could lead to player burnout and injuries, although given the condensed nature of the competition and the Matador Cup, squad management isn’t a foreign concept and could be managed.

Speaking of congestion, the fact that the Aussie cricket summer is so full in 2016/17, it could mean more players are unavailable in terms of both Aussie test/one day players, and international stars.

There certainly are reasons both for, and against the possible expansion of the competition, however given the success enjoyed at current, it’s worth asking the questions.