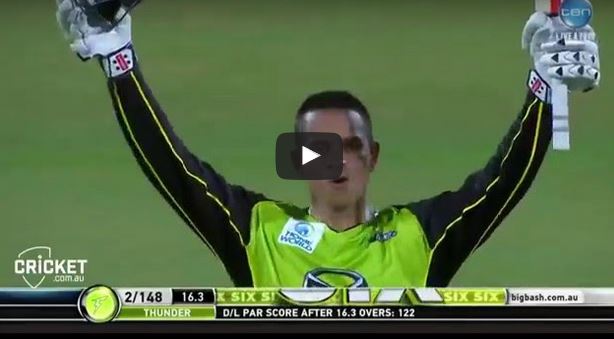 Usman Khawaja hit an astonishing century last night, as the Sydney Thunder beat the Adelaide Striker to advance to the Big Bash final.

Adelaide batted first, scoring 7-159 off their 20 overs, which was always going to be tough to defend, but no one could have predicted the carnage that followed.

Usman Khawaja bludgeoned 104 not out from just 59 balls, in an innings that included 13 fours and three sixes, as the Thunder reached 2-160 with 10 balls to spare.

The opener reached his 50 off just 24 balls. He made batting looks easy, as he scored 48 of the Thunder's first 53 runs inside four overs. Khawaja now has 275 runs this BBL season at an average of 160.

Earlier, the Strikers struggled to get going, losing early wickets, to be 4-64 off 10 overs, before a  quick fire 47 from 38 from Alex Ross and 27 from 16 from Michale Neser helped the Strikers to a competitive total.

The Thunder will face either the Melbourne Stars or the Perth Scorchers in the final.