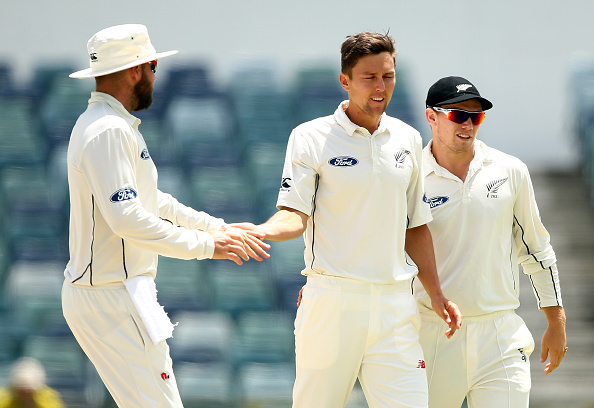 New Zealand are sweating on the fitness of Left-arm quick Trent Boult, who is racing the clock to be fit for the historic day-night Test in Adelaide starting on Friday.

The fast bowler, known for his ability to swing the ball will need to bowl flat out on Wednesday to retain his place in New Zealand’s eleven.

Meanwhile, fellow fast bowler Tim Southee was able to prove his fitness and take part in the drawn second Test in Perth and should take his place on Friday.

Boult is suffering from a disc irritation in his back, the same injury that forced Southee off the field in the first Test in Brisbane.

The 26-year old failed to bowl in New Zealand’s two-day tour match against Western Australia, which was played under lights and with a pink ball.

The left-armer will need to do a lot more to convince Black Caps' coach Mike Hesson he is right to go for the third Test after being able to bowl off a few steps at the WACA prior to play starting on Sunday.

New Zealand have gained valuable pink ball practice in their tour match at the WACA, with Guptill scoring a century and BJ Watling finishing with 81.

With Boult in doubt, the Kiwis may need to rely heavily on a good batting performance as well as part-timer Mark Craig, with his place under pressure following poor performances in both Tests so far.