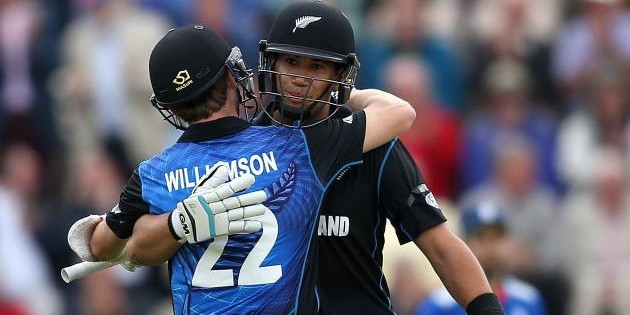 New Zealand has won the third ODI by three wickets against England overnight, thanks to centuries from Kane Williamson and Ross Taylor.

After winning the toss and electing to bat first, England lost two early wickets, with openers Alex Hales and Jason Roy dismissed within three balls, for 23 and nine respectively.

Joe Root then continued his sublime form, combining with Captain Eoin Morgan for a 105 run stand, before Root was bowled by Santner for 54. Stokes then joined Morgan as the pair helped England reach 3-194 in just the 32nd over, before Williamson got the decisive breakthrough of Morgan, who scored his third 50 in as many matches, for 71.

England then collapsed, losing their last seven wickets for 108, to be all out after 45.2 overs for 303.

Southee and Wheeler were the pick of the bowlers, each claiming three wickets for the away side.

Despite being dismissed in the 46th over, England managed to post a formidable total for the Black Caps to chase.

New Zealand was in trouble early in their innings at 2-36, before a stand of 206 between Taylor and Williamson turned the match in their favour.

In a frustrating day in the field for the hosts, both batsmen were dropped by England, on their way to match winning scores of 118 (Williamson) and 110 (Taylor).

Elliot, Santner and Ronchi then had brief but effective stays at the crease, before Wheeler and Southee finished off the run chase with 11 balls to spare, to finish on 7-306.

Kane Williamson was name named Man of the Match for his 88-ball century.

The fourth ODI is on Wednesday at Trent Bridge.