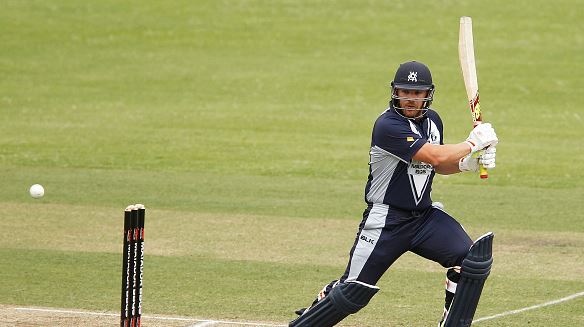 Victoria has beaten the Cricket Australia XI by nine wickets in the Matador Cup.

The Bushrangers dismissed the youngsters in just 28 overs, before securing a double bonus point victory.

The match was won with 233 balls remaining, the biggest victory in terms of delivers remaining in Australian one-day domestic history.

The CA XI, made up of the best young players in the country who just missed out on selection for their state sides, were completely outclassed by NSW in their opening match on Monday, scoring just 59 runs in response to the Blues' 3-338.

The defeat was the largest in terms of runs Australian one-day domestic history.

The Bushrangers have shown that it will be a tough season for the CA XI, bowling the youngsters out for just 79 in their second match of the tournament.

In reply, Victoria reached 1-81 in just 11 overs, to record a nine wicket win.

Marcus Stoinis was the only batsman to be dismissed, caught Short, bowled Dixon for 21 from 22 balls.

Aaron Finch and Cameron White then finished off the innings, scoring an unbeaten 45 and 14 respectively.

Victoria will next play Queensland on Friday, while the CA XI will Tasmania on Saturday.