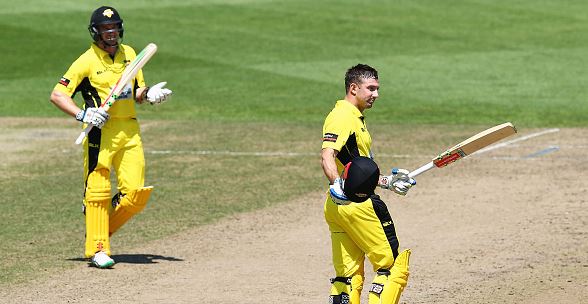 Western Australia have thumped the Cricket Australia XI by a whopping 246 runs in the Matador Cup match at North Sydney Oval.

Shaun Marsh blasted 186, a record for WA in a one-day domestic match, as Western Australia posted a mammoth total.

WA won the toss and elected to bat, with the Warriors making use of the short North Sydney Oval boundaries to record a score of 5-347 off their 50 overs.

Cameron Bancroft was the first to go for 48, after sharing a 99 run opening stand with Marsh. Michael Klinger then  continued the pain for the CA XI, scoring 64 off 72 balls, as Klinger and Marsh notched a 130 run partnership, to be 2-229 after only 39 overs.

Mitch Marsh and Adam Voges were both removed for just five as they hunted quick runs in the final 10 overs.

Shaun Marsh was the last man to be dismissed, with the Test hopeful caught in the deep for 186 from just 148 balls, in an innings that included 23 fours and six sixes.

Ashton Agar (16) and Nathan Coulter-Nile (11) were the not out batsmen.

In reply, the Cricket Australia XI was skittled for just 101 runs.

Opener Jimmy Pierson was removed in the first over the match for just one, with the early dismissal setting the tone for the innings.

Only four players managed to reach double figures, with opener Marcus Harris top scoring with an unbeaten 44 from 64 balls.

Andrew Tyre was the stand out with the ball, claiming figures of 4-35, while Ashton Agar took three wickets, Joel Paris took two wickets and Nathan Coulter-Nile chimed in with one scalp.

The win was the Warriors' first of the Matador Cup, after losses to South Australia, New South Wales and Victoria in their previous three matches.