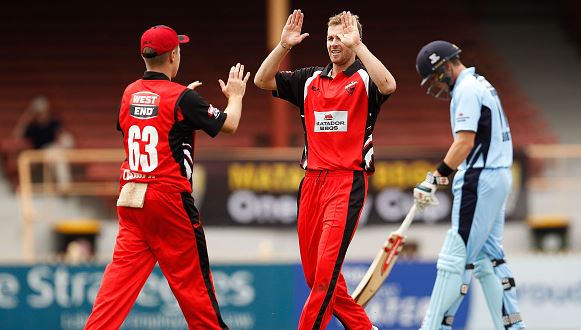 South Australia failed to make the most of an impressive bowling display, to be skittled for just 110, falling 156 runs short of the New South Wales total.

NSW were restricted to just 9-266 off their 50 overs, after being sent into bat by SA.

The Redbacks won removed Nick Maddinson early for just 12, before Steve Smith started where he left off in his last innings, blasting three fours and two sixes as he looked on track for another century.

He combined with Ed Cowan for a 37 run partnership, before Cowan was dismissed for 39 from 55 balls.

That brought Shane Watson to the crease, who would rather forget his dismissal. Watto was removed for just 12 runs, after he received a slow full toss from spinner Adam Zampa. However, Watson swung and missed at the straight ball and was clean bowled.

NSW then began to lose a steady flow of wickets throughout the innings as they failed to ever really get going.

When Smith fell short of his century, heading back to the pavilion for 72 from 83 balls, New South Wales was in trouble at 6-208. With ten overs to go and only the tail to come, they only managed to score 57 runs in the final ten overs.

Henriques (35) and Abbott (25) were the only other two batsman to record useful contributions.

South Australia would have fancied their chances on the small North Sydney Oval, however, the Redbacks found themselves in trouble from the outset. Opener Travis Head, who scored a double hundred on Monday, was dismissed for a duck, after he was bowled by Mitchell Starc in the first over of the innings. Luderman followed shortly after for six to make it 2-14, before Starc struck again to make it 3-16.

Raphael and Cooper put together 33 runs, before O'Keefe trapped the former in front for 21. Cooper (28), Ross (13) and Mennie (12) were the only other batsman to score double figures, as South Australia were bowled all out for just 110 runs.

Starc finished with figures of 4-27, while Abbot and O'Keefe took two wickets each.

New South Wales now remain undefeated after their first two Matador Cup matches, with South Australia now on one win and one loss.