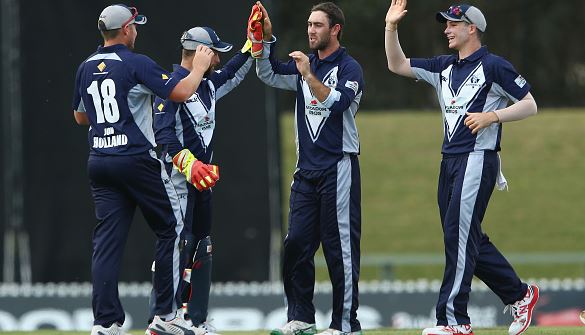 Mitchell Starc has continued his fine form, claiming five wickets to help NSW beat Tasmania, while Victoria has bowled WA out for 189, to record a 36 run win.

NSW bowled Tasmania all out for just 217 in their Matador Cup match at Hurstville Oval, before NSW claimed an eight wicket win.

Paceman Mitchell Starc was once again the chief destroyer, finishing with figures of 5-39 off 8.3 overs.

Dom Micheal top scored with 54, while James Faulkner also notched a half century. George Bailey fell just short of his 50, making 48, while the rest of the Tasmanian batting line up crumbled.

In reply, NSW won by eight wickets in a rain affected run chase that reduced the target to 193.

Cowan and Maddinson shared in another century opening stand, before Cowan was dismissed for 47.

Steve Smith was then removed for his second duck in as many matches, before Shane Watson joined Maddinson at the crease to finish off the victory in the 39th over to make it four wins from four matches for the Blues.

Maddinson finished unbeaten on 118, while Watson was 25 not out.

In the other match today, Western Australia restricted Victoria to 8-225 from their 50 overs on the slow Blacktown Oval pitch.

However, an impressive an impressive bowling performance then saw Victoria bowl WA all out for just 189 to record an important victory.

As has been the theme this tournament, the batting side started poorly, with Victoria struggling at 2-5 after four overs, with Finch (0) and Stoinis (3) back in the pavilion.

Cameron White and Glenn Maxwell then began rescuing the innings somewhat, before White was dismissed for 17.

Maxwell looked in great touch, before he was trapped LBW for 51 off 57 balls to leave the Vics in trouble at 4-84.

Matthew Wade (4) and Peter Handscomb (21) also fell cheaply to make it 6-103 and leave the Bushrangers in danger of giving WA an easy run chase, before Dan Christian (60 not out) and John Hastings (38) restored some much needed pride for Victoria to help them reach a competitive total of 8-225.

In reply, Western Australia started well with an opening stand of 53 between Bancroft and Shaun Marsh, before Marsh was caught for 16.

Michael Klinger followed soon after for six and then Mitchell Marsh came and went for just five, while Bancroft followed him for 64 to leave the Warriors in trouble at 5-124.

WA then lost wickets consistently throughout the remainder of the innings and were unable to wrestle back the momentum, eventually being dismissed for 189.