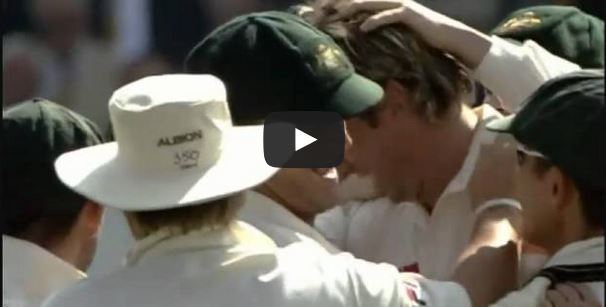 In the lead up to the second Test at Lord's starting today, we look back at the Lord's Test in the 2005 Ashes series when Glen McGrath ripped through England's top order to claim 5-53 to help dismiss the hosts for just 155.

Australia won the first Test at Lord's by 239 runs, in the tourists only Test win of the series, as England would go on to record a 2-1 win in a truly memorable series.

Australia batted first but struggled on a difficult pitch to be dismissed for just 190, as Steve Harmison took five wickets. However Glen McGrath got Australia off to the perfect start in defence of their lowly total, tearing through the English top order, to have the poms reeling at 5-21. England then managed to scramble their way to a dismal total of 155. McGrath's first wicket of the match was also his 500th Test wicket.

Australia ensured they didn't make the same mistakes twice and recorded a far better second innings score of 384, to set England an unlikely target of 419 for victory.

McGrath was the chief destroyer again in England's second innings, as he took 4-29 to record a man of the match performance.