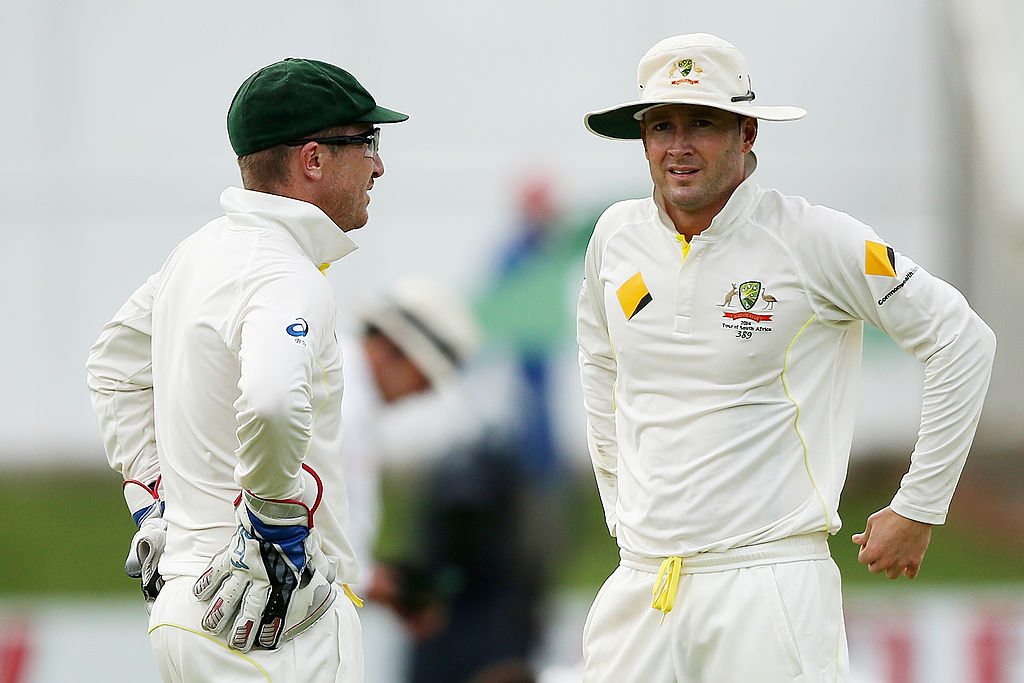 Two Australians that were front and centre of Australia's Test series win over South Africa in 2014, Michael Clarke and Brad Haddin, have called on the current Test side to refrain from excessive sledging.

The Australian ODI team was jawing at the Proteas for most of their 5-0 series defeat in South Africa and the retired pair believe continuing on the same trend would do more harm than good this time around.

"I'm probably contradicting the way I captained, because I loved that aggressive approach and while there was a line, I always liked the team I captained to head-butt that line, not overstep it but head-butt it. That's how I thought we played our best cricket," Clarke told ESPNcricinfo.

"But the more I experienced got I believed it wasn't what you said it was what you did, so your performance wasn't dictated by your mouth.

"I'm probably contradicting myself and my captaincy style because there were a couple of occasions where I did open my big mouth. The reason I did that with James Anderson was to stick up for George Bailey and the Dale Steyn one was sticking up for James Pattinson as well. But I shouldn't have said a word, in both situations there was no need for me to say anything."

Along with Clarke's advice, Haddin has also told the Test squad there's better ways to put off your opponent, with tactics like agressive fielding and 'talking across' the batsmen having the potential to have the same effect as sledging without taking away the focus of winning the game.

"I don't think it's about what you say on the field," Haddin said.

"The best Australian teams I've been a part of have been able to create an uncomfortable environment for the opposition with your body language, your movements around the game, and creating an atmosphere with each other where the opposition feels like they're the only two people out there, or he [the batsman] feels like he's stuck out there by himself.

"Sometimes the best form of that is not to say anything - you wouldn't say anything to a Kevin Pietersen for example because he'd dig his heels in and start taking it personally to hit us all around the park. One of the best things for him was to stay away from him."