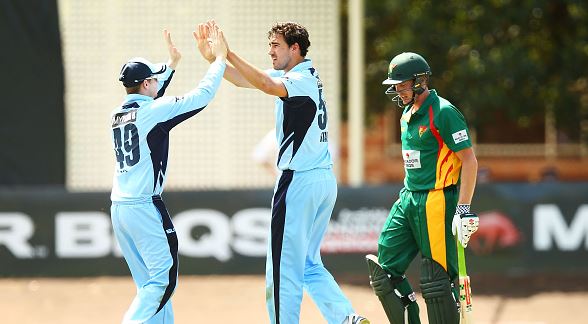 Although it is a shame for all involved that Australia’s tour of Bangladesh was cancelled, you would struggle to find anyone involved with cricket NSW who wouldn’t have at least a wry smile on their face.

The cancellation of the tour has allowed NSW to add to their already star-studded line up as they attempt to go one better than last year’s loss to WA in the Matador Cup final.

Although other squads will of course benefit from the return of their Test stars, NSW really has landed on its feet, as it welcomes the world’s second best one day bowler in Mitchell Starc and Australian captain Steve Smith back into the team.

The addition of the four Test stars means NSW boast a fearsome squad.

Former T20 international Stephen O’Keefe bats at number seven, while an all Australian representative bowling line up of Starc, Sandhu and Lyon fill in the bottom three spots.

Imagine walking out onto Bankstown Oval to face a bowling attack of Starc, Sandhu, Abbott, O’Keefe, Lyon, Henriques and Watson.

Just to rub it in further, it’s also worth mentioning that Josh Hazlewood and David Warner are unavailable due to injury.

Of course cricket is not a game played, or won, on paper and a side needs to play well and gel together regardless of how stacked the roster is.

After four fixtures, NSW sit atop the Matador One Day Cup competition with 21 points.

The manner of their four opening victories has seen them earn five bonus points. Considering a win is only worth four points, they’ve earned more in bonuses than QLD, WA and the Cricket Australia XI have each managed in the entire competition.

Mitchell Starc, who has continued his purple patch with the white ball, has combined figures of 19/114.

Although six of those wickets came against a Cricket Australia XI who have already surpassed expectation with their win over Tasmania, his wickets include Travis Head, Callum Ferguson, Mitch Marsh and Adam Vogues.

Steve Smith has scored ducks in the past tow matches, but scores of 72 from just 83 balls against South Australia, and an incredible 143 off 122 against CAXI, shows he is far from taking a holiday.

Without totally jinxing their chances, with four fixtures left to play, NSW already have one foot in the competition final.

With the Matador Cup final taking place on October 25th and with the Test series against New Zealand not starting until the 5th of November, it’s not beyond the realms of possibility that the Test quartet will be available for the entire tournament.

It is surely better to have them playing competitive cricket, albeit a different format, than sitting around, or batting in the nets.

Although Smith and Starc may skip out on the final, should NSW make it, I honestly think the Test side will benefit more with every game their stars play.

No matter what happens in the remaining fixtures of the Matador Cup, NSW have certainly taken every advantage of the availability of their Test stars.

Whether they can keep up the incredible pace is another question, but as it stands, they simply could not have done more to set themselves up to avenge last season’s loss in the final.