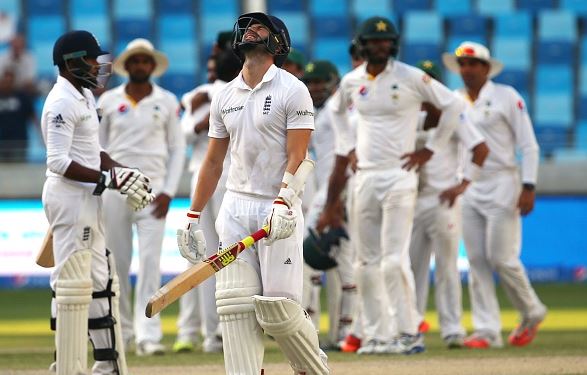 Pakistan's bowlers wore down a tough resistance from England’s tail to win the second Test by an emphatic 178-run margin in Dubai on Monday, taking a 1-0 lead in the three-match series.

Leg-spinner Yasir Shah (4-87) and left-arm spinner Zulfiqar Babar (3-53) shared the bowling honours as England, set a daunting 491-run target, were bowled out for 312 late on the fifth day with just 6.3 overs left in the match at Dubai stadium.

A win early in the day was very much on the cards, but England’s ninth wicket pair of Adil Rashid (61) and Mark Wood (29) put up a valiant fight for 29.2 overs through their 55-run partnership.

Babar ended Wood’s resistance while Shah finished the match by ending Rashid’s 239-minute stay at the crease, having him caught in the covers in the fading light as Pakistan’s fielders embraced each other.

England's numbers eight, nine, 10 and 1 batted for 322 balls (54 overs), making it the longest a tail has batted in a fourth innings in Test history, however, it wasn't enough for the visitors avoid defeat.