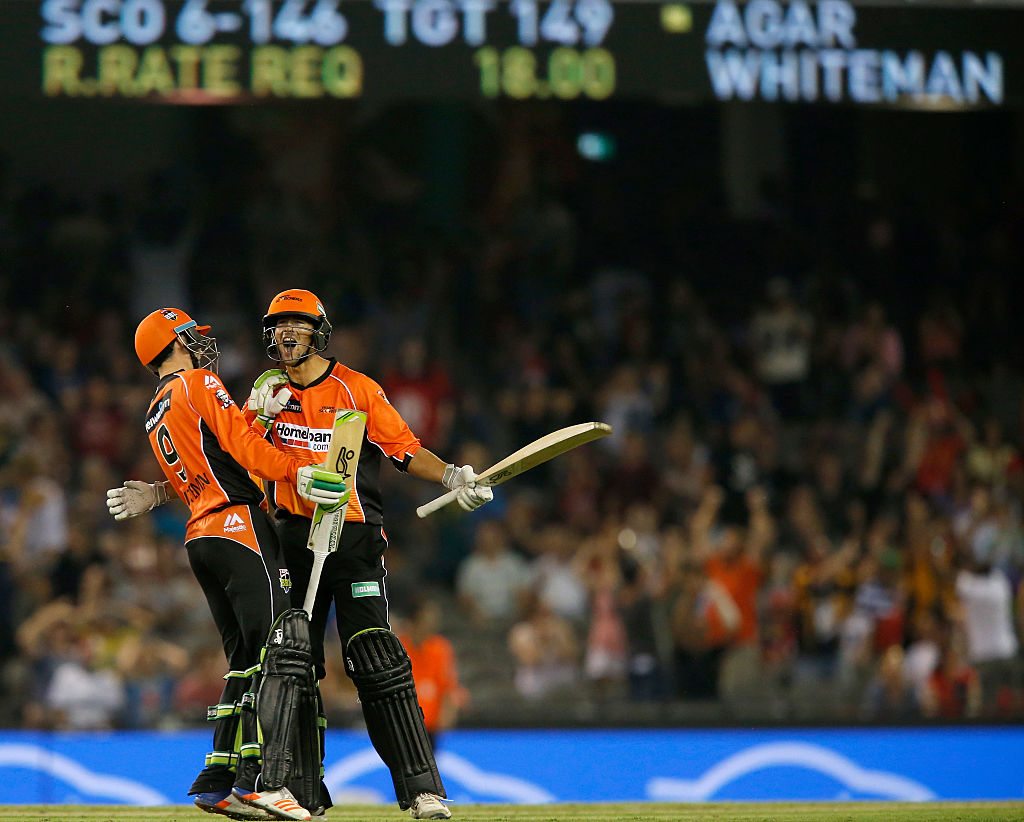 Ashton Agar smashed a six off the final ball to win the game for the Perth Scorchers, as they beat Melbourne by four wickets on Thursday night.

With just nine runs to win from the final over, Renegades captain Aaron Finch chose himself to bowl out the match, and it looked like a brilliant decision after claiming the wickets of Mitch Marsh and Adam Voges in successive deliveries.

Agar then took the strike for the final three balls of the match, and back-to-back doubles saw the scenario fall to three runs off the last ball.

Unfortunately for Finch he looped up a full toss to Agar, and the left-hander dispatched the ball over deep mid wicket to win the game for Perth.

Can you believe it?! Ashton Agar, take a bow! #BBL06 pic.twitter.com/MQctIL1xkK

Michael Klinger led the way for the visitors with the bat earlier in the innings, as an impressive 72 from 55 saw him claim Man of the Match honours.

The Scorchers sent Melbourne in to bat first and the decision looked to benefit Melbourne early, as the home side got off to a strong start.

From that moment it was all Perth, as the Scorchers restricted Melbourne to just 5-38 from the final six overs.

David Willey (2/15 from three overs) and Ashton Turner (2/25 from four) led the Scorchers attack, as a score that originally looked large was now achievable.

Perth were sent in to chase 149 for victory, and they started slowly as Klinger and Shaun Marsh took their time to get their eye in.

The chase was tight for most of the Scorchers' innings, but the Renegades lost a key man when import Dwayne Bravo went off midway through Perth's chase.

The West Indian was injured in the 10th over as his foot got caught in the turf as he dived to save a boundary, and Bravo immediately grabbed at his hamstring as he went to ground.

He left the field on a stretcher with the hamstring injury looking like a severe one, as Bravo will get scans on his injury on Friday but will likely face a race against time to get back before the season ends.

Mitch Marsh and Klinger put on a solid 59-run partnership towards the end of Perth's innings, which allowed for Agar to become the hero with the final ball.

The veteran of the BBL did it again, slamming 72 from 55 to set up the win for the Scorchers.

Agar was undoubtably the hero of the match for Perth, as his six off the final delivery kept Perth's unbeaten record against the Renegades in the BBL alive.

Finch smashed 24 with the ball in a strong top order showing for the Renegades, but his two overs with the ball were even more impressive. A wicket and a direct hit in successive balls in the final over almost saw Finch lead his team to glory, but a poor final delivery let the Scorchers off the hook.