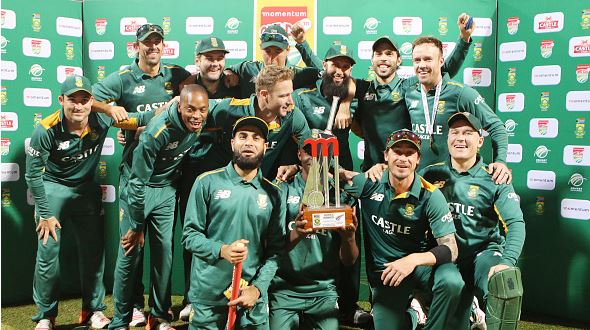 South Africa has won the third ODI against New Zealand by 62 runs in Durban, to claim a 2-1 series win.

The hosts won the toss an elected to bat first, reaching 7-283 from their 50 overs, before bowling the Kiwis all out for 221 in reply.

South Africa made a positive start, making their highest opening stand in 17 ODIs, before Amla was dismissed for 44 to make it 1-89.

Rossouw and van Wyk followed soon after for six and 58 respectively, which brought AB de Villers to the crease. de Villiers put in a man of the match performance with a 64 run innings, which included eight fours and a six, as he put on an 86 run partnership with David Miller (36).

Martin Guptil was the first to go for the Black Caps, in just the fifth over for 10, before Williamson and Latham put together an 84 run stand. However, when Williamson went for 39, it sparked a steady flow of wickets that the Kiwis couldn't stop.