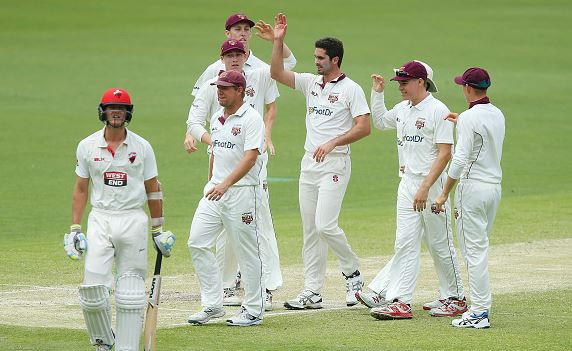 The Queensland Bulls have beaten the South Australian Redbacks by an innings and 14 runs in their Sheffield Shield match at the Gabba.

South Australia went into day four at 4-181, requiring a further 68 runs to force the Bulls to bat again.

However, the Redbacks suffered a lower order collapse to be all out for 235.

Earlier, Queensland won the toss and elected to bowl, dismissing South Australia for just 203 in their first innings.

Alex Ross top scored for the visitors with an unbeaten 92, after he helped rescue the Redebacks with Adam Zampa (57), after they were in a disastrous position at 6-55 early on day one.

In reply, Queensland scored 452, thanks to a century from Marnus Labuscagne (112) and impressive knocks from Matthew Renshaw (94), Nathan Reardon (63) and James Hopes (57).

Joe Mennie impressed with the ball with 3-66 from 33 overs.

Bulls' wicketkeeper Chris Hartley finished with 10 catches to take his career total to 521, overtaking Wade Seccombe for the most Shield dismissal by a Queensland keeper.