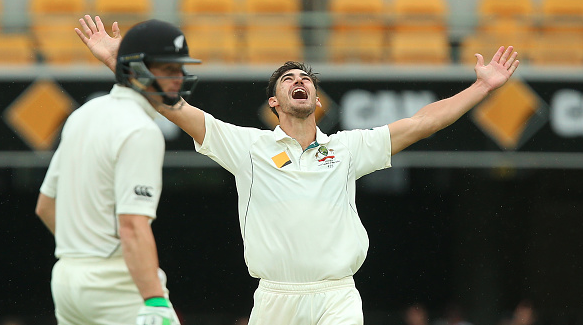 Brisbane's weather could be the only impediment to an Australian victory in the first Test against New Zealand at the Gabba.

Play was halted shortly before lunch on day four, with New Zealand 1-44 in its massive run chase of 504 for victory.

Australia captain Steve Smith looked unimpressed as the umpires instructed the players to leave the field, with rain only falling lightly at the time. But it didn’t take long for the heavens to truly open, with the showers getting heavier after the covers were already on the pitch.

The only wicket to fall on Sunday was that of Kiwi opener Tom Latham, who batted well for his 29 before being trapped lbw by a Mitchell Starc sandshoe crusher.

Smith declared overnight with his side on 4-264 in its second innings, meaning the Black Caps are hoping for a world record run chase to record a highly unlikely victory.